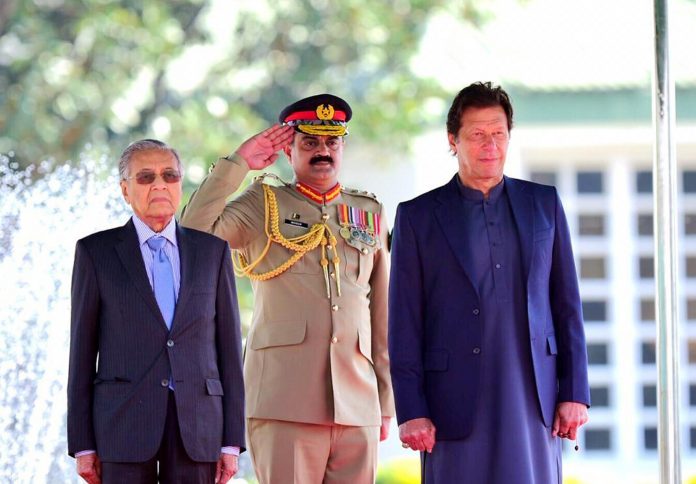 ISLAMABAD: Pakistan and Malaysia on Friday signed five important memorandums of understanding (MoU) to strengthen economic relations by promoting trade and investment, and decided to take joint action to counter the rising wave of Islamophobia across the globe.

The understanding came at a one-on-one meeting between Prime Minister Imran Khan and his Malaysian counterpart Mahathir Muhammad on Friday.

Addressing a joint news conference after their meeting, PM Imran said that Pakistan has always looked upon the Malaysian prime minister as a Muslim statesman who changed his country.

“You say things which other Muslim leaders are scared to say. And it is because a lot of them are not leaders. They are office-holders. Leaders are the ones who have an ideology, who have a clear stand on moral issues, and who take positions. Unfortunately, non-leaders do not take positions. They want to please everyone,” he said.

“It is because of the stands you have taken over the course of a period of time. That is why there is such a great response to you honouring us on an occasion which is very important for us, March 23,” he told his Malaysian counterpart.

“Unfortunately, very few Muslim leaders do take stands on the issues that affect the other Muslim world,” the prime minister said.

PM Imran said that Pakistan and Malaysia enjoyed a brotherly relationship and stood by each other in difficult times. He said that both countries had decided on the formation of a “strong ministerial-level committee which will meet regularly and keep interacting, so we know exactly how we can keep enhancing and increase trade between the two countries”.

“We almost took pride in the way Malaysia developed and raised the standard of living and became like a model for the Muslim world, and that too under your premiership,” he told the Malaysian premier.

Referring to the rise of Islamophobia in the world, he said that it has badly affected the Muslims and expressed the confidence that the Malaysian PM will also forcefully take a stance on the matter.

PM Imran said that all Muslims across the world are blamed for any crime committed by any Muslim. He held Islamophobia responsible for the New Zealand terror attacks.

“Any crime committed by a Muslim is immediately blamed on all 1.3 billion Muslims and this was reflected in the Christchurch killings where a man, a terrorist, brazenly filmed shooting innocent women and children and innocent people in a mosque and that too without any regrets. This is because of Islamophobia,” he said.

Addressing the reporters, Mahathir said that both countries have identified areas of mutual cooperation which could prove to be beneficial for both countries. He said that he believed that increased trade between the two countries will enhance the bilateral relationship.

“We need to identify what you can sell to us and what we can sell to you,” he said. “[There is] no doubt that if we increase our trade with each other, we will benefit in growing our economies.”

“We believe that the trade between us will increase because we now have outlined the measures that we should take. We also talked about the possibilities of foreign direct investment (FDI) by both the countries,” he added.

The Malaysian premier also said that he is “very glad to renew friendship with Pakistan” and attend Pakistan’s national day ceremony. “We have been very well received by the prime minister as well as the government of Pakistan,” he added.

He said that the traders of both countries will be facilitated as his country has set the target of becoming a developed country by 2025.

He regretted that there is not a single Muslim country in the category of developed nations. He said that other Muslim countries should also strive to develop themselves at par with the developed countries.

Speaking of Islamophobia, Mahathir Muhammad said that there is fear, hatred and enmity towards Muslims and this is why Christchurch attack took place.

He said that Pakistan and Malaysia can also cooperate on this particular issue with the aim to bring improvement in the perception of Muslims and reduce hatred and fear towards Muslims.

Later, Minister for Finance Asad Umar later told reporters that the delegation-level talks covered all areas of bilateral importance, particularly combating corruption in the society to avoid losses to national economies. He said that Dr Mahathir also gifted a book to Prime Minister Imran Khan on fighting corruption as the subject was of interest to both the leaders.

The finance minister also said that Malaysia has shown a keen interest in procuring JF-17 Thunder fighter jets and anti-tank missiles from Pakistan.

He said that the visiting delegation sought the participation of JF-17 Thunder aircraft in a defence fair to be held in Malaysia in the near future. The finance minister said that both sides agreed on business and investment worth hundreds of millions of dollars in diverse fields. Malaysia would import Halal meat and rice from Pakistan, while the two sides also agreed to open branches of their banks in the two countries, he added.

The investments would come in different sectors of the economy including telecom, information technology and food, he had said, adding that Pakistan and Malaysia would be interested in promoting business to business relations and would also strengthen ties between their private sectors for tapping investment opportunities.