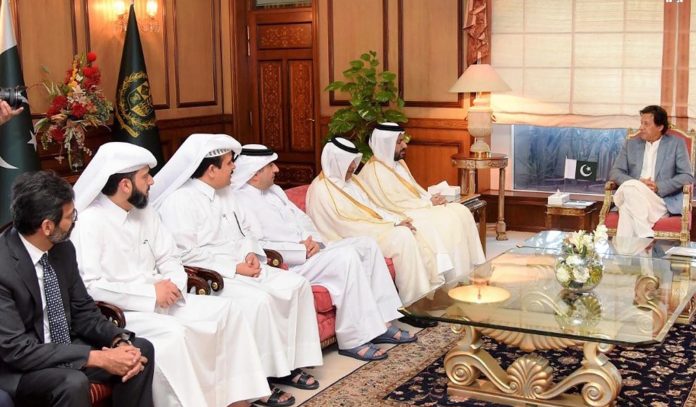 The delegation included the heads of various organisations in housing, tourism, real estate and energy sectors.

The prime minister welcomed the authority’s interest in making investments in the Pakistani economy and highlighted various business opportunities in tourism, housing and other sectors.

The prime minister also highlighted various steps and policy reforms taken by the government to facilitate foreign investors and the business communities.

Prime Minister’s Advisor on Commerce Abdul Razzak Dawood and Board of Investment Chairman Haroon Sharif were also present on the occasion.

Meanwhile, talking to the Qatari delegation in a separate meeting, Planning Minister Khusro Bakhtyar said tourism, energy and infrastructure sectors of Pakistan offer huge investment potential and Qatar could benefit from investing in these areas.

The minister reiterated that the government is committed to ensuring an investor-friendly environment for both local and foreign investors. “The government is also focusing on developing the tourism sector whereby new tourist spots are being discovered and developed,” he added.

Bakhtiar said Qatar could invest in the Gwadar industrial zone, adding that Gwadar would emerge as a leading port that would help enhance regional trade.

The minister further said that Qatar could also invest in various road infrastructure projects in Pakistan. Some projects under the China Pakistan Economic Corridor (CPEC) would be encouraged on build–operate–transfer (BOT) basis.

“Qatar sees Pakistan as an important destination for its food security and we have expressed readiness for it,” he stated, adding that an action plan would be formulated after the identification of areas for investment by the Middle Eastern country.

The advisor was confident that Qatar would start pouring investment in Pakistan within the next few months.

Responding to a question, Dawood said the Ministry of Petroleum would discuss with Qatar the import of additional LNG on a long-term basis.

Earlier in March, Qatar’s Commerce and Industry Minister Ali Bin Ahmed Al-Kuwari welcomed the Pakistani investors to use its market for businesses both inside and outside Qatar.

During the Pakistan – Qatar Trade and Investment Conference, Kuwari asserted that Qatar was open to providing a platform to the Pakistani investors.