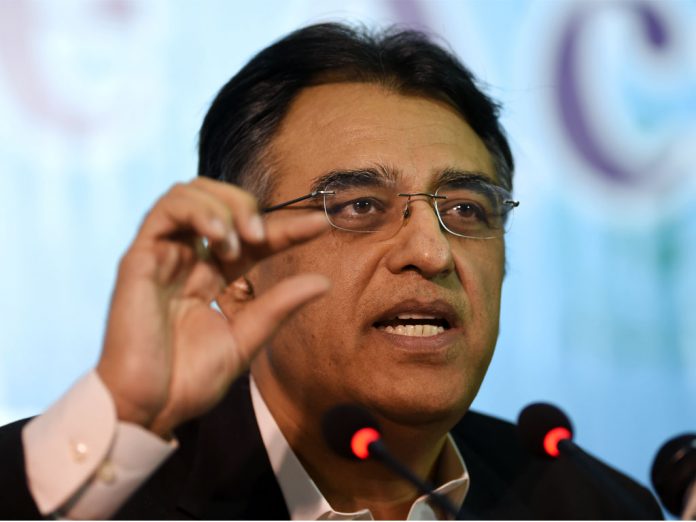 A day after the Pakistan Tehreek-e-Insaf (PTI) government announced its plan of introducing another amnesty scheme to provide non-filers of tax returns an opportunity to whiten their undeclared assets at home and abroad, Finance Minister Asad Umar on Wednesday defended the controversial decision stressing that “it is the need of time due to the prevalent system”.

“Tax amnesty is controversial, of that there is no doubt,” Umar said during a live question and answer session across PTI’s social media forums to discuss the state of the country’s economy and consumer price inflation which rose to 9.4pc in March 2019— the country’s highest since November 2013.

“You can say that it is facilitation of tax evaders which would be a fair point. In my viewpoint, my previous objections are valid today as well. But after consultations, the majority’s view is that it should happen because in Pakistan the system had been such that we want to give people a chance to come into the tax net,” he asserted while responding to a select group of journalists.

“However, if amnesty scheme does come, public officers and civil servants won’t be eligible,” he vowed.

On the government’s decision to not rush into an International Monetary Fund (IMF) programme, he said “Is the economy in this state for the first time in Pakistan? We have two world records: one in trolling and the other in entering IMF programmes. I talked to IMF officials and told them that ‘I don’t want to burden my nation with more loans’. They told me that the situation we have inherited has never been inherited by anyone else.”

“When you take responsibility you also have to take a position. They used to say that IMF programme should be taken immediately so that markets don’t run away. After six months, our reserves are in better shape. I did not rush into an IMF programme just to avoid criticism… an agreement will be reached soon,” he added.

Umar also defended the recent increase of up to Rs6 in petroleum prices, claiming that the government had in fact lowered the tax ratios on oil.

He said, “OGRA [Oil and Gas Regulatory Authority] takes part in petrol price’s calculations. On April 1, when the new prices were recommended, the only thing the government did was reduce the recommended price by Rs5.”

When Umar was reminded that during the Pakistan Muslim League-Nawaz (PML-N) government he had suggested that petrol prices should be set at Rs46, he contested the claim.

“I had never said that petrol should be Rs46. I had said that tax should be lower than it was,” he responded. “Tax ratio at the time was 52 per cent, right now it is 30 per cent. Had we kept the same taxes as before than we could have gathered Rs97bn more from Pakistani public. We have actually lowered the tax ratios.”

The finance minister admitted that the economy was in a bad shape, but assured that there will be light at the end of the tunnel.

“There are two reasons why were are in this mess. We have a budget deficit, and secondly, our external deficit,” Umar said. “To resolve this you either need to increase exports or decrease imports. Our immediate action was to cut imports, which slows down the economy.

When asked how the government would come good on its promise to create two million jobs a year, Umar said, “They say that if the economy does not grow at a 7pc rate, two million jobs won’t be created. As a rule of thumb that [reasoning] is fine, but it [job creation] also depends on what our priorities are.”

“Tourism, SMEs [small and medium-sized enterprises], IT, and housing all are priorities, and all these sectors have the potential of job creation. Some investments create more jobs, some less. There will be growth from year three onward but it would be sustainable and long term,” he stated.

On a question regarding slow economic growth, he responded, “In September, I went to the PSX and I was asked the same question that when would growth be seen in the economy. I told them that we’d go through a stabilisation period of two years after six months of extreme turbulence. Then there will be growth. And now that we are out of survival zone, the purse strings will be loosened.”

Updating on PM Imran Khan’s recent announcement that Pakistan was on the verge of hitting a kind of jackpot in the form of discovering a huge reserve of oil and gas during ExxonMobil-led consortium’s offshore drilling, he said, “There is deep offshore drilling being done 250km away from Pakistan. They have to drill 5,000m deep, of which, last I checked, they have so far drilled 3,500m.”

There was some delay due to rocky formation. When they reach 5,000m we will know what the find is. But we know that it’s potential is big. It’s a high-risk operation. ExxonMobil invests when potential find is massive. If oil is found, it will be a massive find,” Umar added.

When asked why the Federal Board of Revenue (FBR) has not done enough to raise awareness regarding tax benefits and incentives that come with entering the tax net, the finance minister asked Minister for Revenue Hammad Azhar to answer the query.

“It’s right that FBR’s optics are lacking,” Azhar said. “There is a lot of work to be done and there is an awareness deficit. We did do a concerted advertisement campaign, following which a 34 per cent increase was witnessed. But we should do a sustained campaign. We actually want to delve deep down and correct FBR’s fundamental problems. Once those are done, there will be a visible change and then we will [run more awareness campaigns].”

The rising inflation was brought to the finance minister’s notice, to which he said that the issue will be taken up in an upcoming meeting of the Economic Coordination Committee (ECC).

Umar contested the veracity of the numbers quoted by PML-N leader Mohammad Zubair regarding the government’s economic performance, maintaining that the PTI government’s performance is “better than the former administrations”.

“According to Zubair Umar, the SBP numbers are bad,” he said. “I have told him many times to have any opinion he wants but ‘please take numbers from me’. In PML-N’s first year there was double-digit inflation which has not been seen so far here.

“When one attempts to move out of a balance of payment crisis, inflation rises. Ours has increased but increased lower than theirs. Moreover, in their government, inflation was borne mostly by the lowest income class. This time, the opposite has happened; the rich have suffered,” the finance minister said. “As far as unemployment is concerned, even [economist] Hafeez Pasha has said this much that under the PPP, unemployment had increased and under PML-N it increased even more sharply. If you observe the textile industry, the people who had exited the industry are actually coming back.”

He said that the issue of under-invoicing could be resolved through information technology. He said that import from China and Dubai could be checked through the use of IT services.

Asad Umar said that the treasury had foreign reserves of only $1 billion while the monthly current account deficit was $2 billion. He said that the government has to take tough decisions to address the crippling economic situation.

The minister said that strict action against the corrupt elements was in the country’s interest. He said that the best platform to formulate a ‘charter of economy’ was the Senate and the National Assembly.