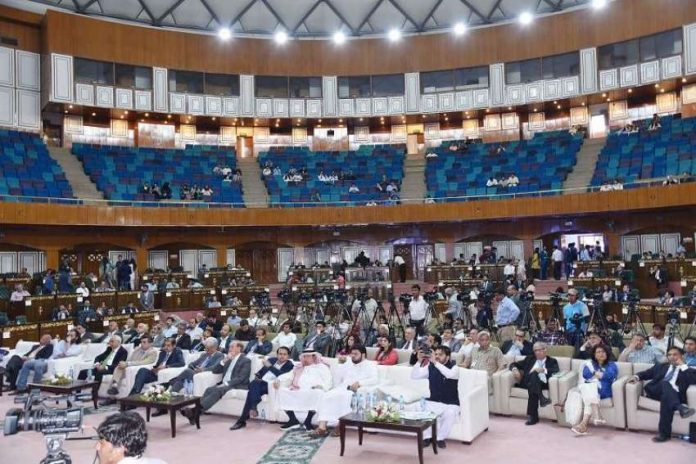 ISLAMABAD: Many productive and practical ideas were discussed during the second day of Pakistan Tourism Summit 2019. Continuing on yesterday’s discussions, some speakers suggested that there is a dire need of tour guides, hospitality staff, and drivers to aid tourists in exploring Pakistan.

However, one suggestion that was most repeated was ‘smiling to appear more hospitable and welcoming’. Several panellists and guests appeared to ascribe to the idea that when one lands on an airport in European or American countries, the staff there welcomes foreigners more warmly than compared to the immigration staff at the airports in Pakistan.

President of International Institute of Peace Through Tourism, Louis D’ Amore, indicated that smiling faces can lead to significant change in perception of tourists and said “every host is potentially an ambassador of peace in Pakistan.”

Another recommendation came from journalist and political commentator Dr Moeed Pirzada, as he moderated the first panel discussion, that Pakistan needs a story, a narrative, like those of London and Paris to bring people in. He said, “People visit cities based on their history, and many cities in Pakistan have it. Lahore has a beautiful narrative and we need to sell it.”

In the second panel discussion moderated by Naseeb Networks Chairman Monis Rahman, Fintech FinJa Co-founder and CEO Qasif Shahid added to Dr Moeed’s suggestion by reminding the attendees of the time when Pakistan was a much-loved stop at the end of the overland hippie trail. “People all over the world came here because they thought East deals better with time, death, relationships, and a particular green plant,” he said, “We already have a narrative and a rich history. We need to communicate that to people.” Monis added, “We are at the stage of infancy in tourism. Our product is excellent, and if we market it well, we can indeed take our tourism industry to 10x – one thousand percent as where it is right now.”

Some panellists brought insights to the discussions from their line of work. Reckitt Benckiser-Pakistan CEO Fahad Ashraf said that while all these things may lead to more attractions for tourists, groundwork also needs to be done to achieve any practical benefits. “No one likes to talk about it, but there is a severe shortage of clean and safe toilets on almost all our tourist attractions. Until such utilities are provided we cannot gain full potential of the tourism industry.” FINCA Microfinance Bank Ltd CEO M Mudassar Aqil said that the one nation who is definitely not scared to come to Pakistan are the Chinese. “We should start from there and provide facilities for them. China accounts for 61pc of global online payments, and all over the world smartphones are the primary mode used to book tickets and flights. We need to provide such products in our country to ease travelling methods for tourists.”

The second day of the tourism summit saw more energy and more productive discourse on the revival and expansion of the tourism industry of Pakistan, than day-1 (yesterday). Many political personalities also graced the event and shared their current and future plans to promote tourism in Pakistan. State Minister for Interior Shehryar Khan Afridi, Provincial Minister of Khyber Pakhtunkhwa for Tourism, Culture, Sports, Archaeology and Youth Affairs Mohammad Atif Khan, Minister of State for Parliamentary Affairs Ali Muhammad Khan, members of parliament, diplomats and a number of tour operators from various countries were also present at the conference. A Ukrainian singer performed at the conference and sang Dil Dil Pakistan.

The prime minister was announced to be the chief guest and scheduled to deliver the closing address, but later that was cancelled. Instead, he adressed a select few at the Prime Minister’s Office. President Arif Alvi was also not present at the conference, unlike few news outlets might have reported earlier in the day.

The summit also came under heavy fire on social media for one of its promotional posters for day-2, having an ‘all-foreign v-loggers’ guest list, and not a single Pakistani v-logger. The primary argument posed by the critics was that this summit was marketed as a moot to inform and encourage locals to improve conditions for tourism, and then Pakistan’s travellers and V-loggers were totally ignored, even though they are actually trying to change the global image of Pakistan, toward being more tourism friendly.