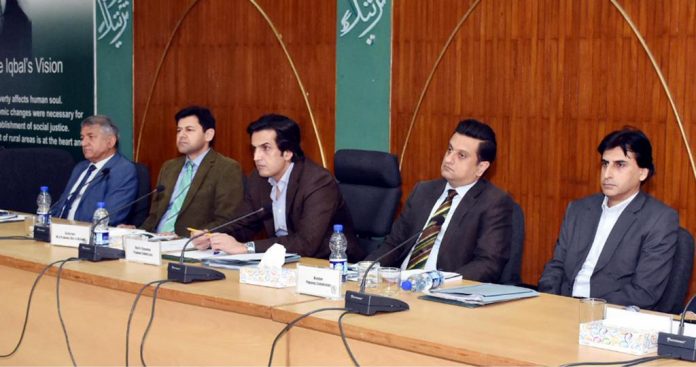 ISLAMABAD: The Central Development Working Party (CDWP) has approved a project worth Rs552.708 million and has recommended three projects worth Rs209.5 billion to the Executive Committee of National Economic Council (ECNEC) for consideration.

The CDWP meeting was held on Monday under the chairmanship of Planning Minister Makhdoom Khusro Bakhtiar. Planning Secretary Zafar Hasan and senior officials from the federal and provincial governments also attended the meeting.

Projects related to energy, transport and communication sectors were presented on the occasion.

The first energy project, ‘500KV HVDC Transmission System between Tajikistan and Pakistan for Central Asia-South Asia Transmission Interconnection (CASA-1000)’, worth Rs45.9 billion, was presented by the Power Division. The project, which envisions transmission of electricity from Tajikistan to Pakistan through Afghanistan, was recommended to ECNEC for consideration.

According to details, the CDWP was informed that a converter station was initially proposed at Peshawar. However, due to sabotage activity in recent past at the 500kV Sheikh Muhammad grid stations, the donor agencies had shown their concerns regarding security of the area. Therefore, Nowshera was found more secure as compared to Peshawar due to cantonment area and in the vicinity of proposed site.

The third energy project, ‘Balakot Hydropower Project’, worth Rs85.91 billion, was also presented by the Energy & Power Department of Khyber Pakhtunkhwa. The project was recommended to ECNEC for consideration.

The project envisions construction of 310MW Balakot Hydropower Project on Kunhar River, a major tributary of River Jhelum. The energy generated would provide more reliable and consistent power to the local area as well as the national grid.

In the transport and communication sector, the Sindh government presented a ‘Construction of BRT Red Line Project’ worth Rs77.59 billion. The project was also referred to ECNEC for consideration.

The project envisages construction of metro bus-dedicated corridors measuring 29.1km in length, from Numaish to Malir Halt depot, as well as a common corridor of 2.4km. The project shall contribute to the development of a sustainable urban bus transport system in Karachi with less travel time and enhanced mobility and accessibility. Estimated passengers per day would be 320,000.

Moreover, a proposal related to the Federal Board of Revenue’s ‘Domestic Resource Mobilization’, worth $400 million, was approved by CDWP.

Speaking on the occasion, the planning minister said that the incumbent government has the political will and is committed to enhancing the tax revenue collection by mobilizing internal resources.

- Advertisement -
Facebook
Twitter
Linkedin
WhatsApp
Email
Previous articlePR to facilitate local automotive industry in procurement of parts
Next articleReady when you are, EU tells US on trade talks