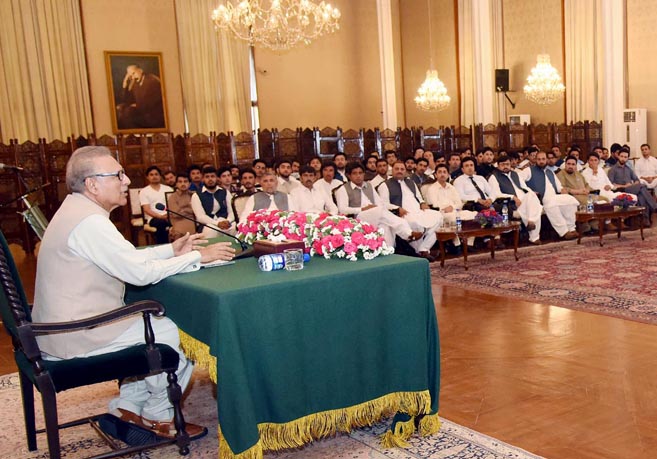 ISLAMABAD: President Dr Arif Alvi on Friday acknowledged the longstanding partnership between Pakistan and the Islamic Development Bank (IDB), saying that Pakistan intends to further its bond with the bank.

Talking to IDB President Dr Bandar M H Hajjar at the President House, Dr Alvi emphasised that the incumbent government was introducing reforms to steer the economy out of the current economic challenges. In this regard, he said the government was focused on fiscal consolidation, monetary policy and financial inclusion.

He underlined that the government was focusing on affordable housing and small and medium enterprises sectors in order to boost employment opportunities and economic growth.

The president highlighted that the first phase of the China Pakistan Economic Corridor was about to complete and now the government was focusing on the second phase that included the establishment of special economic zones. “This would transform Pakistan’s transport network into an economic corridor.”

He pointed out that investors from all over the world were keen to invest in Pakistan due to its liberal investment regime and rising economic opportunities.

The president appreciated IDB’s support for the polio eradication programme and expressed confidence that the existing cooperation between Pakistan and IDB would be strengthened further in the years to come.

Meanwhile, in a separate meeting, President Dr Arif Alvi said that Khyber Pakhtunkhwa and tribal areas would be the biggest beneficiaries of CPEC.

Talking to a delegation comprising students from different institutions of Khyber Pakhtunkhwa and tribal areas, the president said CPEC, as a game-changing project, would reshape regional connectivity with enhanced investment opportunities.

The president said a joint struggle was required to recover infrastructural losses occurred in tribal areas during war against terrorism. He underlined that purging extremism from the country was a continuous process which needed patience and time.

Dr Alvi maintained that the country’s foreign relations had improved significantly during the past few months as a result of the restoration of peace. Improved security conditions must be exploited for further investment, especially in the tourism industry, he added.

The president noted by availing online business opportunities, the country’s cottage industry could be improved with more employment opportunities for women.