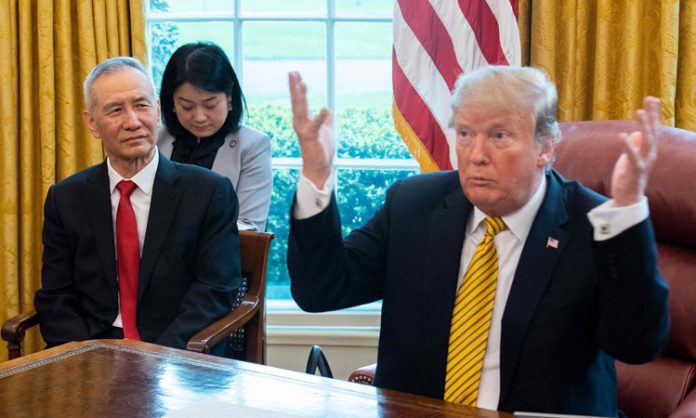 WASHINGTON: US President Donald Trump cranked up the heat in a trade battle with China on Friday, ordering a tariff hike on almost all remaining imports from the world’s second-biggest economy, but Beijing said talks would continue to resolve the row.

After tweeting that two days of trade talks in Washington had been “candid and constructive,” the businessman-turned-politician changed tack and followed through on a threat he had been making for months.

“The President… ordered us to begin the process of raising tariffs on essentially all remaining imports from China, which are valued at approximately $300 billion,” US Trade Representative Robert Lighthizer said in a statement.

The move came less than 24 hours after Washington increased punitive duties on $200 billion worth of Chinese imports, raising them to 25pc from 10pc, days after the Trump administration accused Beijing of reneging on its commitments.

Details on the process for public notice and comment will be posted Monday, ahead of a final decision on the new tariffs, Lighthizer said. They were not expected to go into effect for several months.

China’s top trade negotiator, Vice Premier Liu He, had warned earlier that Beijing “must respond” to any US tariffs.

The developments came as two days of talks to resolve the trade battle ended Friday with no deal, but no immediate breakdown either, offering a glimmer of hope that Washington and Beijing could find a way to avert damage to the global economy.

“Over the course of the past two days, the United States and China have held candid and constructive conversations on the status of the trade relationship between both countries,” Trump tweeted.

“The relationship between President Xi (Jinping) and myself remains a very strong one, and conversations into the future will continue.”

The tariffs on China “may or may not be removed depending on what happens with respect to future negotiations!”