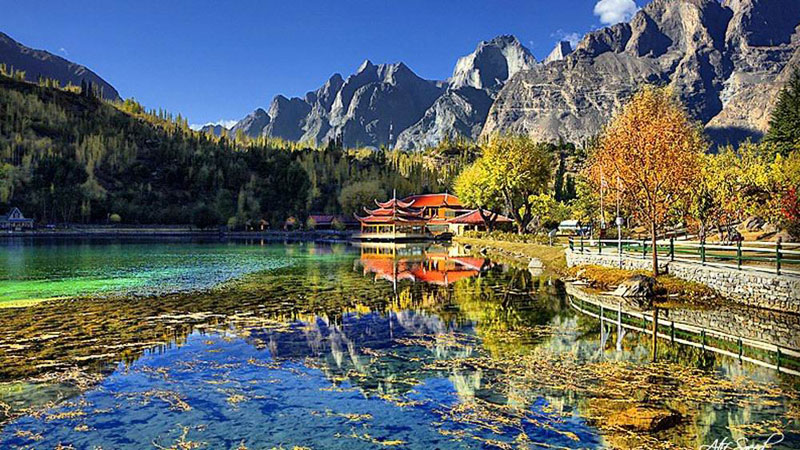 It is a story more familiar in the popular imagination as having played out on the campuses of Stanford or Harvard in the United States: a few smart, curious, driven young students get together in a dorm room and create a product that becomes the foundation of a major tech company. Except the dorm room in this story is at the Lahore University of Management Sciences. And the startup in question is FindMyAdventure – Pakistan’s sole tourism market-place, which connects vendors and tour operators with tourists.

The idea for creating the company first came to CEO Komail Naqvi, who used to lead university’s official excursion party. It was 2016, and the first idea the five founding members Husnain Habib Malik, Khawaja Raza Abbas, Komail Naqvi, Shozab Naqvi and Syed Haider Raza thought about doing was to start their own tour operating, but they quickly came to the realization that a tour operator on its own is not a scalable business.

Instead, they decided to establish a marketplace for tour operators, giving options to tourists from a much larger menu of both operators and destinations. The idea has been a relatively quick success, with the company already earning revenue from three main sources: a percentage of revenue from tour operators when they are able to get referrals from the website, directly selling customized tourism packages, and through facilitating B2B clients.

Since its founding in 2016, three of the five founding members are now earning their livelihood entirely from the startup, which has been making them more money than had the three of them been working for the banks or multinational companies like Procter and Gamble. And meanwhile, the company has attracted capital from foreign investors as well as the United States Agency for International Development (USAID).

According to the World Trade Organization (WTO), international tourism is a bigger business than the global trade in oil, food, or automobiles. Tourism has become one of the major players in ‎international commerce and represents at the same time one of the main income ‎sources for many developing countries. This growth goes hand in hand with ‎increasing diversification and competition among destinations.‎

He is right: as recently as 2013, there were just 566,000 foreign tourists in Pakistan. In 2019, the World Travel and Tourism Council estimates Pakistan will get 1.4 million tourists from outside the country. About half of those come from Britain, the United States, and Canada, with over one-third coming from Britain alone. (Now you know why British Airways is resuming direct flights between London and Islamabad.)

And those tourists are beginning to generate serious economic value for the country. The total value of the spending by foreign tourists within Pakistan is expected to exceed $1 billion this year.

The growth is beginning to result in much more business for tour operators in the country. Rocket Tourism’s Fahd Vohra said that last year, his company sent 150 people to the Northern Areas and this year, he estimates that the number will be roughly 300 people.

However, Vohra said that rupee devaluation can be one of the reason as well for increase in domestic tourism as people may have skipped their trips to places like Thailand and have opted for local tourist destinations.

Carving a niche in tourism

A LUMS graduate and a former banker, Malik is one of the co-founders of FindMyAdventure, which has entertained over 8,000 tourists in less than three years so far since its inception in 2016. The startup has so far generated more than $1.2 million in gross revenue in its two and half years of operations. Revenue streams are through retail trip bookings and corporate sales. The startup aspires to become a one-window solution for corporate clients.

FindMyAdventure was awarded USAID’s Small and Medium Enterprise Activity and Innovation Grant in recognition of its efforts to improve livelihoods and socio-cultural vibrancy in Pakistan in Pakistan last year.

The funds it received from USAID has helped them launch their pilot Guides Program and now they have 30 guides in the country. However, the startup wants to increase the number of guides and the vision is to have a guide at all tourist destinations in the country.

“We are in the initial phase and it has been very satisfactory experience so far. I was among only five people from Pakistan, who were selected to attend Alibaba’s entrepreneur program,” Komail said.

Alibaba e-founder fellowship was a 14-day learning intensive fellowship structured around the formation of Alibaba and the tech ecosystem of China. It is designed to help entrepreneurs from other countries in Asia learn and adapt their techniques.

The travel startup allows individuals and groups to choose from planned itineraries or customized trips, along with offering accommodation, transport, and convenient payment options in a one-window operation.

FindMyAdventure has also catered foreign tourists. Komail Naqvi says that one out of every 10 clients are foreigners, and they contribute 7% of the company’s revenue in 2018. The startup counts local corporate clients, who may have several persons included for one trip, as a single client. That difference in record-keeping is what accounts for the difference in the share of foreign tourists by number of persons and total spending.

Yet despite accounting for a small fraction of overall tourist volume for the company, they tend to account for the majority of certain types of tours: for instance, 98% of the people who attempt to climb K2 are foreign tourists.

According to the financial records of of FindMyAdventure, made available to Profit, 60% of tourists that FindMyAdventure has catered to booked tours in the North region, 35% in the coastal regions, and 5% for religious tourism.

The London-based International Hospitality Investment Group (IHIG) has recently started its operations in Pakistan with a different brand name – Happily, offering what they claim is a cost-effective vacation home ownership system in Pakistan.

Happily CEO Noorul Asif said that IHIG has already acquired two hotels and upgraded facilities with modern amenities in Shogran and Bhurban. IHIG will be investing $118 million in the tourism industry of Pakistan with focus on mainly providing accommodation.

“We believe that the best time a family spends together is during vacations. We want to make then an experience of a lifetime,” Noorul Asif said.

However, Happily operates on a different model from hotels. It offers a membership fee that allows families to share the ownership of vacation properties with other families. A person selects an offering for one, two or three families. They also have to choose from three seasons: peak (red), mild (white) and off season (blue), with pricing varied for the time of the year. The package allows the person to have an ownership stake in the vacation home of their choice, which allows them to spend a week or two per year over a period of 15 or 25 years.

However, one would not be restricted to vacationing in that one spot for the next few decades. Owners of Happily’s shared vacation homes can also exchange their week with IHIG’s partner hotels in 80 countries.

“If you want to exchange your week with a four-star in Dubai, you only have to pay a nominal amount of around 200$ for a week in Dubai. According to my research, you will have to pay otherwise $200 for one-day stay at a comparable hotel,” a sales representative said.

Asif said that shared vacation homes and exchanges are common throughout the world but Happily has brought the concept to Pakistan for the first time.

“The company will be starting its operations in next few months in Pakistan. The tourism industry has been growing so that certainly has enticed us to start our operations for foreigners touring Pakistan as well,” Bookit 247 Business Development Manager Wasif Arshad said.

The company has been facilitating Pakistanis who travel abroad by helping them find hotels online. The company is a joint venture between Treet Corporation’s Syed Sheryar Ali and Netsol Technology’s Omar Shahab Ghauri.

At the moment, Bookit 247 is signing agreements with different hotels in Pakistan, ahead of starting its operations in the country.

The industry has reasons to rejoice as the present government is seemingly taking interest in the tourism sector too. Prime Minister Imran Khan earlier this year has approved National Tourism Coordination Board (NTCB), led by his Special Assistant on overseas Pakistanis Zulfi Bukhari as acting chairman. He has now been made chairman of Pakistan Tourism Development Corporation (PTDC).

The board will coordinate with national and international organizations to boost the tourism sector in the country. The board would also work for promotion and marketing of tourism spots and would provide a platform to devise a comprehensive strategy on tourism. NTCB would also provide technical assistance to the provinces in the field of the tourism sector.

The Imran Khan Administration has been focused on promoting tourism in Pakistan and has also taken several steps to facilitate travelers. The government has relaxed the visa policy and announced the offering of online visas to visitors from 175 countries last year.

The government has also taken keen interest in promoting religious tourism too. Prime Minister Imran Khan laid the foundation stone of the Kartarpur crossing last year that would give opportunity to Sikh pilgrims from India to visit their sacred sites in Pakistan. The prime minister has also sought to help create sufficient infrastructure to facilitate tourists.

The challenges that remain

However, despite government’s seemingly keen interest in helping the tourism industry, there is a long way to go for the industry to reach its true potential in the country.

Erum Khan, who heads Odyssey Travel Company, said that Pakistan has all the ingredients to have a potential thriving tourism industry but the present infrastructure is either of por quality or nonexistent to expect a turnaround from the industry.

She said that government can facilitate the industry by e-visa or on arrival visa for tourists but it will not increase the capacity of the country to host tourists. There is a lack of guest houses and hotels on the way to tour destinations proper in the north.

“One has to travel for around 18 hours to reach tourists in Hunza and Skardu. I can tell you there are not enough guest houses on the way. Some people want to relax and can’t travel for so long in one go,” she said.

Erum says that the industry could help resolve Pakistan’s chronic foreign exchange problem if the industry is not only promoted but hard work is also done. Infrastructure has to be established to accommodate inflow of tourists.

“Otherwise, the industry has not been established for seven decades. If the bull is not taken by the horn then nothing would happen for another fifty years.”

Director Marketing of IHIG Group’s initiative in Pakistan, Zohaib Hassan said that the company has been facing challenges to convince people in Pakistan that tourism in the country can also be a big thing.

“Our agriculture yield is dropping and almost every sector is struggling. People need to understand the tourism against his backdrop. It can play a big role for us. Look at Dubai. It’s completely sand and one can see where they stand. How their tourism industry has facilitated overall economy. We also have a lot of beaches and mountainous regions. We must exploit these natural offering in the country,” he said.