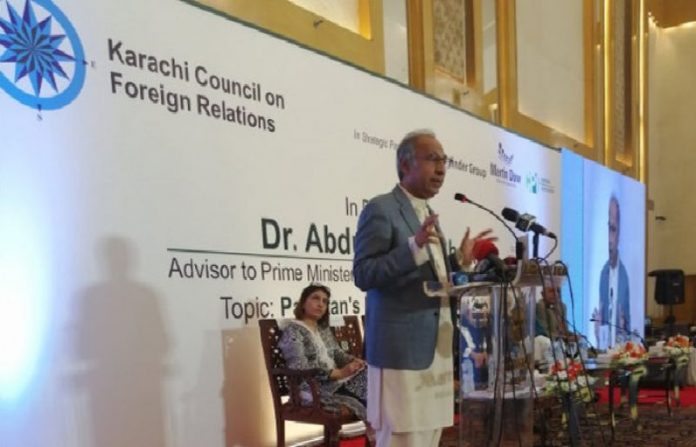 KARACHI: Adviser to Prime Minister on Finance Dr Hafeez Shaikh said on Friday that historically, Pakistan has never been able to perform well economically and had missed important steps that could have put the country on the path of success.

“Pakistan has never been able to sell its products,” he said during an event on Pakistan’s economy and budget, hosted by Karachi Council on Foreign Relations.

Hafeez Shaikh said that 15 to 20 countries that prospered, especially after World War 2, had three things in common.

“Number one was that they focused on their people. Secondly, they sold their products and formed alliances with other countries for trade facilitation. And third, they depended on private sector dynamics while countries that depended on government support were left behind,” Dr Hafeez Shaikh added.

According to Dr Hafeez Shaikh, Pakistan at the moment was going through a stabilisation period, as remedial work was under process. The increase in interest rates and the falling value of rupee has been hitting the country hard and people have started criticising the government in a chorus, he noted.

“We have gone to the International Monetary Fund (IMF) before. We have come out of the crisis before as well but it has never been longlasting. So we now have to have a strong foundation to sustain the (economic) stability,” he added.

He said that he won’t be mingling with the exchange rates as it was not his domain.

He admitted that Pakistan was faced with an alarming situation. “We import virtually everything and still we think the exchange will be kept at a certain level,” the finance minister said, sarcastically.

He was also critical of the official recognising of non-filers.

“There is an official category of non-filer. We are now eliminating that. Whoever buys a property or a car worth Rs2.5 million will be given 45 days to become a filer. On the 46th day, they will be made filers automatically.”

Hafeez Shaikh also announced that the government will not be taking any loans from the State Bank of Pakistan from July 1st.

“I am honoured to serve Pakistan. I would request overseas Pakistanis to look for opportunities in their homeland. There are good opportunities here,” said SBP Governor Dr Reza Baqir, who previously served the IMF.

He said that interest rate was a tool to fight inflation, adding that when inflation was expected to increase, interest rates had to be increased. “It’s a universal practice and those countries, who have financed the deficits by publishing currency, have all suffered badly. This SBP (setup) will not monetise the government deficits,” he added.

FBR Chairman Shabbar Zaidi on the occasion said that they were now finding sectors and people who have a very low tax incidence, as well as those where tax incidence is high.

“We have deeply analysed agricultural economics. Middlemen in the garb of agriculturalists take all the benefits. It is the least documented sector as compared to other sectors,” he added.