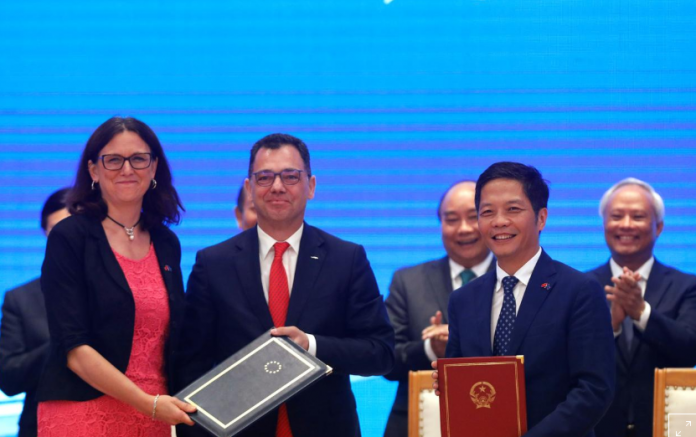 HANOI: The European Union signed a landmark free trade deal with Vietnam on Sunday, the first of its kind with a developing country in Asia, paving the way for tariff reductions on 99 per cent of goods between the trading bloc and Southeast Asian country.

It still needs the approval of the European Parliament, which is not a given as some lawmakers are concerned about Vietnam’s human rights record.

The European Union has described the EU-Vietnam Free Trade Agreement (EVFTA) as “the most ambitious free trade deal ever concluded with a developing country”.

The two sides announced the deal in a statement.

It was signed in Hanoi between European Union Trade Commissioner Cecilia Malmstrom and Vietnam’s Minister of Industry and Trade Tran Tuan Anh, three-and-a-half years after negotiations ended in December 2015.

It will eliminate 99 per cent of tariffs, although some will be cut over a 10-year period and other goods, notably agricultural products, will be limited by quotas.

Vietnam, which has one of the region’s fastest-growing economies, backed by robust exports and foreign investment, has already signed about a dozen free trade pacts, including an 11-country deal that will slash tariffs across much of the Asia-Pacific, known as the Comprehensive and Progressive Agreement for Trans-Pacific Partnership (CPTPP).

The agreement with the EU is also expected to open up public procurement and services markets, such as for the postal, banking and maritime sectors.

The EU is Vietnam’s second-largest export market after the United States, with main exports including garment and footwear products.

In 2018, Vietnam exported $42.5 billion worth of goods and services to the EU, while the value of imports from the region reached $13.8 billion, official data shows.

The Vietnamese government said on Sunday that EVFTA would boost EU exports to Vietnam by 15.28 per cent and those from Vietnam to the EU by 20.0 per cent by 2020.

In Asia, the EU has trade agreements with South Korea, Japan and Singapore, and it has launched negotiations with Indonesia, Malaysia, the Philippines and Thailand.

The EU-Singapore deal is set to come into force later this year.