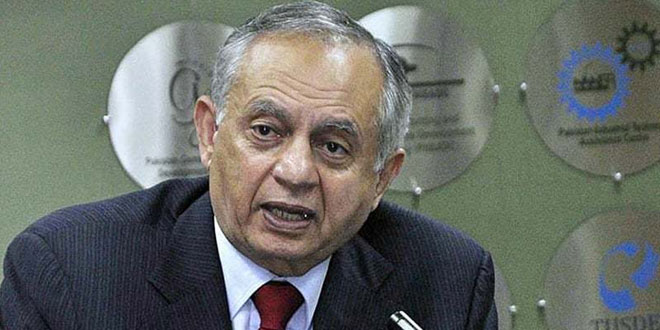 LAHORE: Adviser to Prime Minister on Commerce Abdul Razak Dawood said on Monday that 14pc rise in export and 18pc fall in imports in July 2019 proved that “things are now moving in the right direction”.

Speaking at the Lahore Chamber of Commerce and Industry’s (LCCI) Export Trophy-2019, he said the government was striving hard to rectify the mistakes committed by the past regimes.

“We had a trader-led consumption-driven economy in the past. Uncontrolled imports, under-invoicing, contrary to the fact tariff structures and an irrational exchange rate policy had crippled the economy,” he said. “Major industries had stopped manufacturing and relied on imports because there was five per cent duty imposed on finished goods as compared to 20pc on the import of raw materials.”

Dawood said that the incumbent government’s was duty-bound to take corrective measures as it understood the gravity of the situation.

“Our survival lies in exports. It is the government’s responsibility to give businessmen market access to different countries.”

The adviser said that China had agreed to extend duty-free access on 313 tariff lines. “I have targeted five countries, namely USA, Canada, Japan, Korea and Australia, to get market access for Pakistani businessmen,” he asserted.

He said that engineering and other sectors were being focused for exports, lauding the fact that Pakistan had exported tractors to Mozambique, Tanzania, Kenya etc.

LCCI President Almas Hyder said on the occasion that the current account deficit remained the biggest problem of Pakistan, while the huge gap between import and export had created issues like currency devaluation and rise in interest rates.

He said, “Exports have paramount importance in Pakistan’s economy as these are the main source of revenue generation (around $24 billion) and employment creation. Exports are also imperative to maintain the country’s balance of payment.

“As Pakistan aims to become a competitive economy in the region, it is important for us to enhance our export revenues so as to deal with multi-dimensional economic challenges that have confronted our nation.”

Almas Hyder stressed the need for a long-term integrated export strategy that encouraged investment in manufacturing, promoted value-addition, and resolved long-standing issues like competitiveness and productivity.

“Special focus in the new export strategy should be given to technology-intensive industries with immense export potential, like sports goods, surgical, auto parts, chemicals, value-added textile, ceramics, cutlery, engineering goods and pharmaceuticals etc. There was also a need to enhance Pakistan’s industry competitiveness through a rational tariff regime that promoted industrialization and an efficient system of refund payments which would not squeeze the working capital of the industry,” he added.

The LCCI chief said that the persistent business regulatory challenges, including company registration, electricity connection, construction permits, insolvency and property registration etc. needed to be dealt with to facilitate investment in export-oriented industries.

“As the countries around the world are moving swiftly towards smart regulations, electronic portals, Pakistan would have to adopt a similar course and review old regulations with a Regulatory Guillotine,” he concluded.