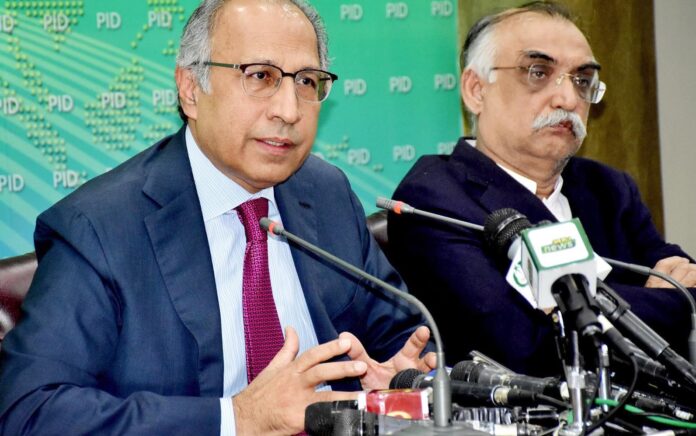 ISLAMABAD: Owing to the tough economic reforms introduced by the government, twin deficits including current account and fiscal deficits reduced significantly during the first quarter of the financial year 2019-20.

This was stated by Adviser to Prime Minister on Finance Dr Abdul Hafeez Shaikh during a press conference on Saturday. Federal Board of Revenue (FBR) Chairman Shabbar Zadi was also present on the occasion.

The adviser said that the economic reforms have gradually started showing positive results and that all macro-economic indicators showed resilience during the first quarter of current financial year. Owing to these reforms, the current account deficit shrank by 35pc, as it came down from $9 billion to $5.7 billion in 1QFY20, he added.

Shaikh continued that the fiscal deficit also witnessed a 35pc reduction, as it came down from Rs738 million to Rs436 billion, while revenue collection surged by about 16pc during the period under review.

“The government did not borrow any money from the State Bank of Pakistan nor released any supplementary grant in order to ensure strict adherence of fiscal discipline.”

The net portfolio investment increased by $340 million which also helped restore the confidence of foreign investors, he said, adding that exports that were stagnant from the last five years, had also witnessed growth.

He said that the investors’ confidence was also restored in the stock market, as the Pakistan Stock Exchange swelled by 22pc, while the index had crossed the 34,000 points mark.

Dr Shaikh said all the measures introduced by the government were aimed at bringing prosperity in the life of a common man and the results of all these measures would ultimately benefit the country’s downtrodden segment.

Replying to a question, he said that the government had made appropriate releases for the developmental projects under PSDP. To another question, he said that small and medium enterprises (SMEs) were vital for economic development of the country, adding that the government would introduce an SME Policy in next two weeks to facilitate small traders.

Regarding the Financial Action Task Force (FATF), the adviser said that all national institutions were striving to comply with FATF conditions as it was in the larger interest of the country.

“Most of the conditions have been met and the country is determined to come out form the grey list as soon as possible.”

Speaking on the occasion, the FBR chairman informed that fruitful negotiations with the UAE’s Ministry of Finance were held to identity Pakistani tax evaders. He said that negotiations with traders were also in progress, adding that so far over 40 meetings had taken place and all the issues would be addressed amicably.