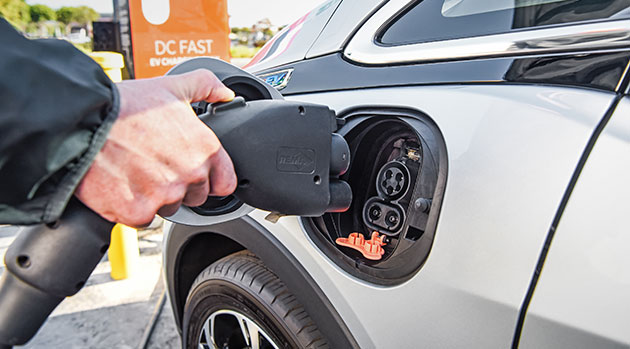 ISLAMABAD: Local car manufacturers are anxiously waiting for Electric Vehicle policy, drafted by the present government to encourage the production of battery-run automobiles which would be environment-friendly and cost-effective.

“The government has already sent the draft of the Electric Vehicle Policy to the quarters concerned for formal approval,” said an official source in the Ministry of Climate Change on Wednesday.

After a shocking ratio of vehicular emissions in the ambient air pollution across the country, the present government has drafted Electric Vehicle Policy to usher a new era of green development by promoting electric cars.

The automobile industry has welcomed the government’s initiative to acquaint the local market with developing trends of the global markets. Interestingly, most of the local automobile producers had manufactured electric motorbikes and cars but are awaiting the policy to be formally approved by the government.

The number of fuel-based vehicles, on the other side, is increasing at an alarming pace. In 2018, in Karachi alone, over a thousand new vehicles were hitting the roads every day. Karachi already has an estimated 3.3 million vehicles on its roads.

The Ministry of Climate Change has worked out a comprehensive and inclusive Electric Vehicle policy with detailed stakeholder deliberations to kick start a new industry with the aim to reduce air pollution due to vehicular emissions and the pressing burden of fuel on the country’s imports bill.

Adviser to Prime Minister on Climate Change Malik Amin Aslam informed that initially the working on the policy framework was first carried out in Lahore University of Management Sciences (LUMS) where they practiced different models to introduce electric vehicles in the country.

Initially, a two-wheeler model was made at a cost of Rs 65,000 by a local industrialist in Lahore, hence more sustainable and inexpensive model was required.

At present, a successful conversion of a two-wheeler bike was carried out with Rs 20,000 cost which was encouraging to introduce electric vehicles in the country, he added.

Malik Amin Aslam said electric vehicles will have serious impact on air pollution, fuel import bill and save two-thirds of the cost of the transportation.

“Our goal is to first introduce two-wheeler and three-wheeler electric vehicles mainly rickshaw and motorbikes. We have set a target to convert 30 percent of the country’s transport on electric vehicles by 2030,” he added.

The draft has been submitted to the Federal Cabinet and would be approved in its upcoming meeting, Amin told APP.

Amin Aslam said “We have the vision to make Pakistan an exporting hub of electric vehicles globally other than an indigenous electric cars manufacturer.”

“We will try to invite global companies to chip in and take advantage of Pakistan’s increasing potential of electric vehicles’ growth,” he added.

The sources in the Ministry of Climate Change revealed that the point of inflexion for electric vehicles was around 2023 to 2025 after which it would be easier to introduce electric cars with affordable prices other than two and three-wheelers.

Recently, a local motorbike manufacturing plant in Sahiwal had produced inexpensive electric motorbikes that has the same design of two-wheelers developed by Japanese industries available in the market.

“The average maintenance cost of this bike is one eighth of the gasoline run motorbike. It has no smoke and sound which makes it completely eco-friendly,” reported BBC.