Talks between govt, traders fail; shutters to remain down tomorrow 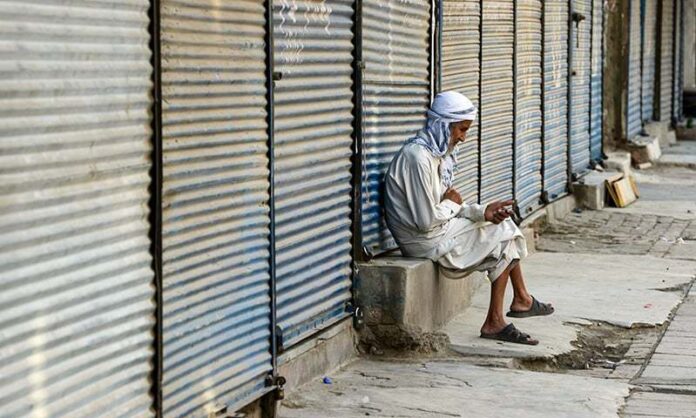 ISLAMABAD: As the government and the traders’ community failed to reach an agreement on Tuesday, the traders have announced to observe shutter down strike on Wednesday (tomorrow) as well.

On the other hand, Advisor to Prime Minister on Finance and Revenue Dr Abdul Hafeez Shaikh has once again reminded the traders that an overwhelming majority of them were not paying their due taxes.

Talking to media at the finance ministry, he said out of the around 3.5 million traders across the country, only 392,000 traders were in the tax net. The government, he added, was striving hard to bring all traders into the tax net so that the economic burden could be shared.

“The contribution of traders in the economic development of the country could not be ignored,” he maintained. “Economic growth of the country is not possible without the support of traders.”

He stated that talks with traders were underway so that a consensus could be reached.

The nationwide strike call was given by a cluster of five different trade bodies. All Pakistan Anjuman Tajiran (APAT) President Ajmal Baloch criticised the government functionaries, saying that the traders were being pushed to become violent or break laws.

“They are only wasting our time,” Baloch said. “Either they are too smart and are trying to fool us in front of the traders or they are inviting aggression from our side.”

He blamed the PM’s finance advisor the FBR chairman for backtracking from the decisions taken during earlier talks. “The strike will continue and we will request those who had opened their outlets today to observe shutter down tomorrow,” he added.

Meanwhile, the Islamabad Chamber of Commerce and Industry (ICCI) has urged the government to negotiate with the traders and resolve their issues peacefully.

ICCI President Muhammad Ahmed Waheed said that the country, at present, cannot afford strikes and shutdown of business activities. “We appeal to the prime minister and finance advisor to give due consideration to the demands of traders who have been forced to go on strike,” he said in a statement, adding that instead of enforcing tax laws in one go, the government should adopt a gradual approach to broaden the tax base.

The ICCI leader said that it was difficult for small traders to maintain accounts of their income and expenses and if they were registered in sales tax, it would enhance their cost of doing business.

“FBR should engage traders in the dialogue process, as traders also want to resolve this issue through talks,” ICCI president said.

Business centres in major cities of Pakistan including Karachi, Islamabad and Lahore observed shutter down strikes on Tuesday. The charter of demands for the two-day strike included the abolition of the condition to submit CNIC, restoration of the Rs1.2 million income limit for income tax, announcement of fixed tax scheme for traders, stoppage of actions by Pakistan Telecommunication Authority (PTA) for the registration of mobile phones, restoration of the old property tax system, stoppage of the imposition of penalties by different institutions and the collection of professional tax from professionals and organizations reduction in trade tax.