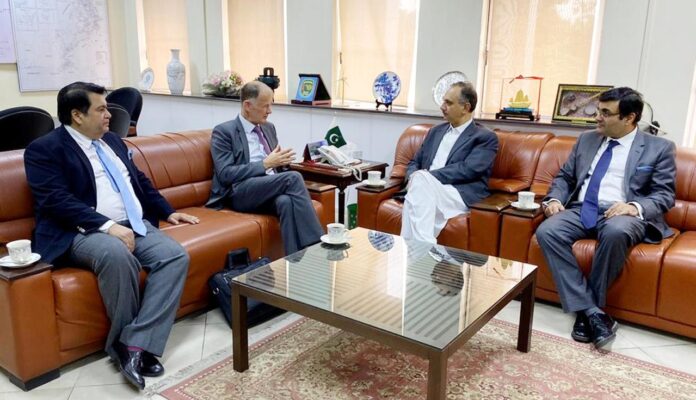 Hall apprised the minister about Royal Dutch Shell’s area of operations in the South Asian region with a focus on current and future plans in Pakistan.

He stressed upon Shell International’s unequivocal commitment to meet not just Pakistan’s but the world’s growing energy demand in economically, environmentally and socially responsible ways.

Shell Pakistan MD/CEO Haroon Rashid shared some of the core areas of operations in the country including in the retail, lubricants, trading, supply, business and aviation sectors.

He also informed the minister about Shell Pakistan’s retail network of strategically located 780 plus sites leading to direct, indirect employment opportunities and being a market leader in the country’s lubricant market.

The minister welcomed James Hall and appreciated Royal Dutch Shell’s sustained cooperation with its domestic partners. He also commended Shell’s commitment to Pakistan and its intent to expand in the Pakistani market.

He outlined the government’s resolve to introduce reforms in the economy and energy sectors. He particularly stressed upon the government’s focus to improve the ease of doing business in the country and the good progress that has been made on that front recently.

The minister shared a brief overview of Pakistan’s energy mix and how the present government plans to diversify and increase the share of renewables in the overall energy mix.