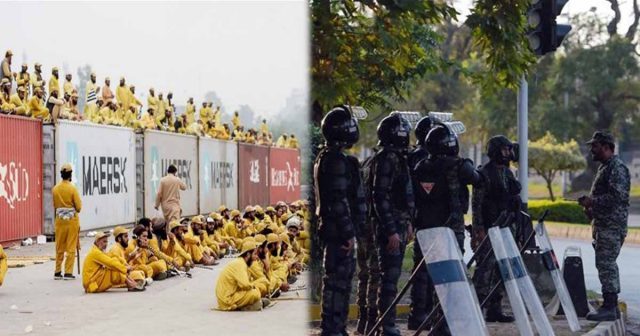 The federal government spent at least Rs527 million on security measures to keep the Azadi marchers, gathered at a ground in sector H-9 of Islamabad, at bay.

The sit-in called by the Jamiat Ulema-e-Islam-Fazl (JUI-F) to pressurize the government for the resignation of the prime minister ended on Wednesday after JUI-F chief Maulana Fazlur Rehman opted for Plan B.

According to this plan, the JUI-F will block major highways across the country.

Islamabad had been under a virtual lockdown due to the sit-in and the government had placed at least 680 containers on the routes leading towards the Red Zone and other areas to contain the protesters. The rent had been agreed at Rs0.5m per container that translated into Rs71.40 million in total.

Approximately 19,000 personnel from the Frontier Corps (FC), police and other law enforcement agencies from various cities in the capital city were called to enhance security before and during the Azadi March.

The daily costs of housing, petrol, food, and beverages for these officers amounted to 30 million rupees, according to the city administration, aggregating to Rs450m for 15 days.

Due to Metro bus suspension, the residents of twin cities were also bearing the brunt of this ongoing sit-in of JUI-F as they were forced to hire taxis and online ride-hailing services for traveling in the twin cities.

The total cost of security in the federal capital was more than Rs527.60m, but expenditures for officers still in town continued at the time of the report.