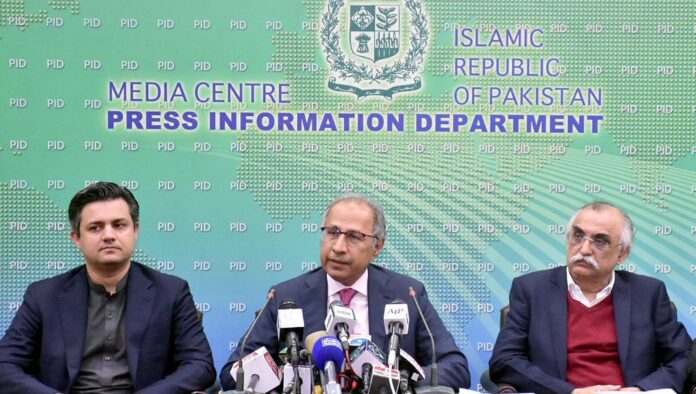 ISLAMABAD: In order to attract investments in the country and to facilitate the large-scale manufacturing sector, the government on Tuesday hinted at reducing the interest rate in January 2020.

Addressing a joint press conference flanked by Economic Affairs Minister Hammad Azhar and Federal Board of Revenue (FBR) Chairman Syed Shabbar Zaidi in Islamabad, Adviser to Prime Minister on Finance and Revenue Hafeez Shaikh said that the policy rate may come down by next month. However, he added, the Monitory Policy Board of State Bank of Pakistan would decide about the rate, keeping in view the inflation ratio.

“The current policy rate was decided in the best interest of the people, as inflation directly hits the masses. The policy board of the independent central bank is reviewing everything related to the [interest] rate,” he added.

With an aim to contain inflation, the SBP had increased interest rate from 5.75pc in September 2018 to 13.25pc.

Talking about the continuous slide in the large-scale manufacturing sector, Minister Hammad Azhar said that the sector was hardly 15pc of the entire economy, adding that negative growth in one sector should not be counted as an overall reduction in growth.

“With 3pc growth in the overall economy, the LSM sector will also see a positive change,” he maintained.

To a question regarding rising inflation, Hammad Azhar said that inflationary indication, noticed in consumer items, has multiple factors, including seasonal disorder, administrative failure and lack of facilities at utility stores. He said the ban on imports of some agriculture items from India had also created temporary shortages.

In reply to another query, FBR Chairman Shabbar Zaidi said since the automation of refunds system, there has been no issue regarding holding of exporters’ refunds claims. “At least Rs5 billion have been released through the automatic system without any human interference. Out of the Rs25 billion worth claims, refunds of Rs16 billion are already under process.”

The FBR chairman admitted that there was a difference between the number of actual filers and the revenue generated, noting that there was a 50pc jump in filers as compared with 16pc increase in tax collection during the past few months.

“The jump in the number of filers does not mean a similar increase in revenue as there are many filers contributing little in taxes,” he explained.

To a question, Dr Hafeez Shaikh said that the shortfall in revenue against the ambitious target for this fiscal year would be met by non-tax revenue of around Rs1,200 billion. “Due to the prudent policies of the government, Pakistan’s non-tax revenue has witnessed a 100pc increase.”

The adviser claimed that the International Monetary Fund has also lauded the pace of Pakistan’s economic progress and that the fund has decided to release the second tranche of $500 million to Pakistan.

He said for the first time in Pakistan’s history, portfolio investment reached $1 billion, exports increased by 10pc while foreign direct investment rose by 236pc during the last five months.

The adviser continued that Pakistan current account rose into surplus, “which means that the economy was heading towards the right direction”.

The adviser noted that Pakistan’s economic outlook would be stabilised and the balance of payments dynamics would continue to improve, supported by policy adjustments and currency flexibility.

He said the government’s expenditures were being controlled as part of measures for economic uplift.

“The SBP reserves, which were struggling for the past few years, have now been stablised,” he said, adding that petroleum prices were lowered keeping in view the reduction in prices worldwide.