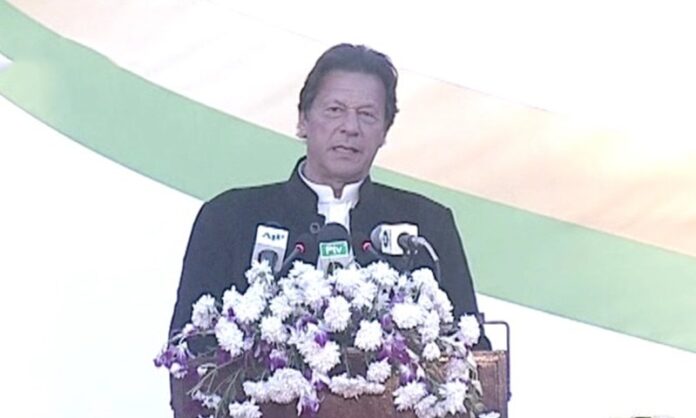 KARACHI: Prime Minister Imran Khan on Friday told businessmen that the federal government has issued an ordinance to keep the accountability watchdog away from the business community.

“You will be happy to hear this that we have insulated the business community from NAB [National Accountability Bureau],” PM Imran said while addressing traders and businessmen at the Pakistan Stock Exchange.

“I know there are some of my friends sitting here and they must be happy to hear this because they were also facing NAB cases,” he added.

Earlier in the day, the federal cabinet approved the NAB Ordinance, 2019. It will now be sent to President Arif Alvi.

The premier said the business community had been raising the issue of NAB with government officials, as it was “free to probe anyone”.

“It is our contention that NAB should only conduct scrutiny of public office-holders,” he said. There were other institutions such as the Federal Board of Revenue (FBR) to probe the business community, Imran added.

The prime minister told businessmen that the government was studying models of various countries to provide relief to investors. He assured them that their problems would be resolved and his economic team would always be there to help them.

Imran said that he would continue to meet with businessmen as he does, at least every once in two months.

“I will resolve your problems because the country needs it,” PM Imran said, adding that new investors would only come to Pakistan if the existing ones were making profits.

The government would now focus on “small and medium” industry and help them, the prime minister said.

He said that the state would not only ensure that its citizens were provided dignity, it would ensure the implementation of “equal justice for all”.

“These are the two principles on which an ordinary country can become a great one,” he said, adding that the state of Madina provides the perfect example to learn from as it lead on all fronts, whether scientific or business.

“The more we concentrate on why Pakistan was created, the clearer our roadmap ahead will be. Whether it is business or our foreign policy, the roadmap lies in the country’s vision.”

The prime minister said Pakistan was envisioned on the same founding principles on which the state of Madina was created. He said the business community would have to play a very important role in the realisation of this vision.

Business creates wealth and a country cannot advance until there was wealth creation, said PM Imran.

“Wealth creation is only possible when the business community prospers,” he said, adding that it was the government’s task to facilitate them with “ease of doing business”.

“It was a great feat for us that despite having inherited a bad economy, with institutional collapses all around, we were able to jump 28 points up on the ease of doing business index of the World Bank,” said the premier.

The PM regretted that profit-making was misconceptualised in the country and confused with profiteering over the past few decades. “We want people to make money […] we will see that there is ease in doing business.”

He said the path to progress had begun after a difficult period in the first year of the government’s rule. “But the rupee has stabilised now and investors have confidence,” he added.