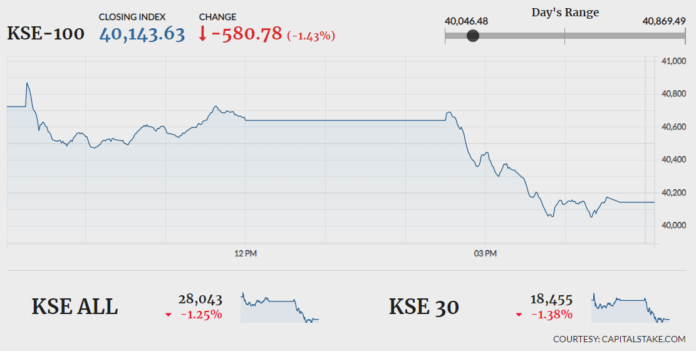 KARACHI: The Pakistan Stock Exchange (PSX) was once again hijacked by bears, as the indices that opened on a positive note soon took a dip and headed south thereon to close in the red.

The one-week return of the benchmark KSE-100 Index was recorded at -3.57pc.

Foreign investors closed the preceding session (on Thursday) as net sellers with a net outflow of $7.39 million.

According to media reports, the National Assembly’s Standing Committee on Finance recommended the government to revisit the new stock market brokers’ regime, which, in its current form, “could result in the monopoly of some big brokers” over the bourse.

Meanwhile, Pakistan’s liquid foreign exchange reserves increased by 1.54pc to $18,645 million (as on 31st January 2020). Net reserves held by the State Bank of Pakistan appreciated by 3.01pc while reserves with commercial banks declined by 1.19pc.

Also, domestic cement sales witnessed an increase of 6pc in the first seven months of FY20, with exports surging by 39.49pc. However, on a month-on-month basis, domestic sales declined by 7.76pc whereas exports rose by 4.9pc.

On the market front, Sazgar Engineering Works Limited (SAZEW -4.27pc) declared its financial performance for the second quarter of FY20. The company recorded a growth of 2.24pc in its sales and 22.7pc in its gross profit. Despite a 197pc increase in financial cost, the company’s earnings per share rose from Rs0.15 in 2QFY19 to Rs0.24.