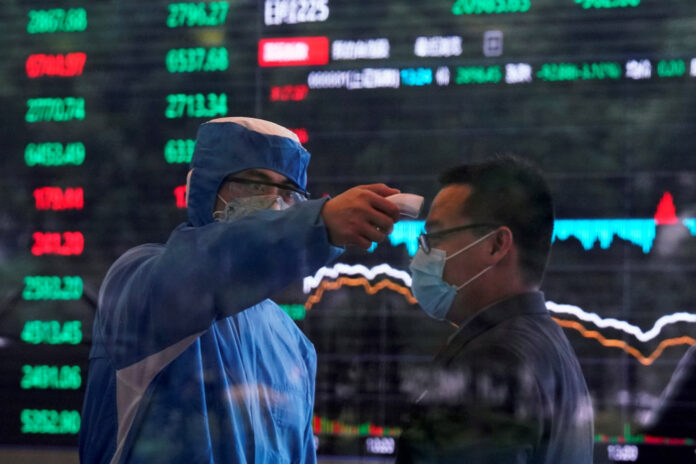 The rout showed no signs of slowing as Europe’s main markets slumped 3-5 per cent and the ongoing dive for safety sent yields on US government bonds, seen as probably the securest asset in the world, to fresh record lows.

Hopes that the epidemic that started in China would be over in months and that economic activity would quickly return to normal have been shattered this week as the number of international cases spiralled.

Bets are now that the Federal Reserve will cut US interest rates as soon as next month and other major central banks will follow to try and nurse economies through the troubles and stave off a global recession.

“Investors are trying to price in the worst case scenario and the biggest risk is what happens now in the United States and other major countries outside of Asia,” said SEI Investments Head of Asian Equities John Lau.

“These are highly uncertainty times, no one really knows the answer and the markets are really panicking.”

Disruptions to international travel and supply chains, school closures and cancellations of major events have all blackened the outlook for a world economy that was already struggling with the US-China trade war fallout.

MSCI’s all country world index, which tracks almost 50 countries, was down more than 1pc ahead of US trading and almost 10pc for the week — the worst since October 2008.

Wall Street shares plunged 4.4pc on Thursday alone, their largest fall since August 2011. Futures pointed to a modest 1pc drop later, but the S&P 500 has lost 12pc since hitting a record high just nine days ago, putting it in so-called correction territory.

Europe’s airlines and travel stocks have plunged 18pc in their worst week since the 2001 9/11 attacks in the United States. The CBOE volatility index, often called the “fear index”, jumped as high as 47, its highest in about two years, well out of the 11-20 range of recent months.

The index, which measures expected swings in US shares in the next 30 days, typically shoots up to around 50 when bear market selling hits its heaviest and approached almost 90 during the 2008-09 financial crisis.

In Asia, MSCI’s regional index excluding Japan shed 2.6pc. Japan’s Nikkei slumped 3.7pc on rising fears the Olympics planned in July-August may be called off due to the coronavirus.

“The coronavirus now looks like a pandemic. Markets can cope even if there is big risk as long as we can see the end of the tunnel,” said chief investment strategist at Mitsubishi UFJ Morgan Stanley Securities Norihiro Fujito.

“But at the moment, no one can tell how long this will last and how severe it will get.”

World Health Organisation Director General Tedros Adhanom Ghebreyesus said the virus could become a pandemic as the outbreak spreads to major developed economies such as Germany and France.

About 10 countries have reported their first virus cases over the past 24 hours, including Nigeria, the biggest economy in Africa.

The global rout knocked mainland Chinese shares, which have been relatively well supported this month, as new coronavirus cases in the country fell and Beijing doled out measures to shore up economic growth.

The CSI300 index of Shanghai and Shenzhen shares dropped 3.5pc, to bring its weekly loss to 5pc and the worst since April.

Oil prices languished at their lowest in more than a year having plunged 12pc this week — the worst since 2016 — while all the major industrial metals have dropped between 3pc and 6pc.

The appeal of guaranteed income sent high-grade bonds rallying. US yields — which move inversely to the price — plunged with benchmark 10-year note yields hitting a record low of 1.1550pc in frenzied European trading. It last stood at 1.1847pc.

That is well below the three-month bill yield of 1.43pc, deepening the so-called inversion of the yield curve.

Historically an inverted yield curve is one of the most reliable leading indicators of a US recession.

Expectations the Fed will cut interest rates to cushion the blow are rising in money markets. Analysts say Fed funds futures are now pricing in about a 75pc chance of a 25 basis point cut at the central bank’s March 17-18 meeting.

The European Central Bank historically lags the Fed but it is now seen cutting by another 10 basis points by June.