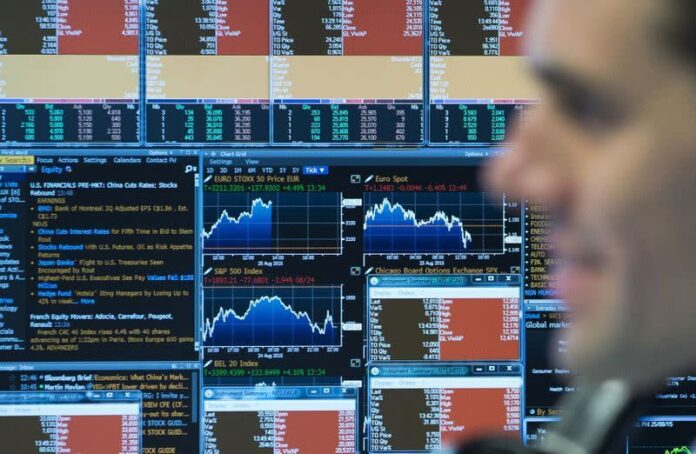 LONDON: Shares slipped from a one-year peak, sovereign bond yields fell, and oil prices slumped as a wave of coronavirus infections, a fresh lockdown in Germany and US and European sanctions over China combined to curb risk appetite worldwide.

US markets appeared set to inherit the negative mood with S&P 500 futures down 0.4pc ahead of Congressional testimony by Fed Chair Jerome Powell and Treasury Secretary Janet Yellen later in the day.

In remarks prepared for delivery to a congressional hearing on Tuesday morning, the Fed chief Powell said the US economic recovery had progressed “more quickly than generally expected”.

“The FOMC last week laid out pretty clearly what the Fed’s view is with regard to rates… the next thing that markets will focus on is maybe getting some details from Yellen with regard to further infrastructure investment,” said Alex Wolf head of investment strategy for Asia at J.P. Morgan Private Bank, referring to a statement from the Federal Open Market Committee.

The Turkish lira appeared to find a floor after Monday’s historic 7.5pc slump, rising as much as 1pc in volatile trading to 7.7192 against the dollar.

In Asia, MSCI’s broadest index of Asia-Pacific shares outside Japan dropped 0.66pc, hurt by a 0.95pc fall in Chinese blue chips as a fresh wave of US and European sanctions related to human rights abuses in Xinjiang hit.

The sanctions on China prompted an immediate riposte from Beijing against the EU that appeared broader, including European lawmakers, diplomats, institutes and families.

Adding to market jitters were further worries over the efficacy of the AstraZeneca Plc vaccine developed with Oxford University after a US health agency said the drugmaker may have included outdated information in its data.

Oil prices fell 4pc, hit by concerns that new pandemic curbs and slow vaccine rollouts in Europe will hold back a recovery in demand along with fresh travel restrictions.

“Global travel is still looking like it could be a while away,” said Matt Stanley, a fuel broker at Star Fuels in Dubai, adding that a second-half recovery in oil demand looked doubtful as lockdowns remain the order of the day.

The dollar gained slightly against a basket of six major currencies last trading at 92.019, having slipped 0.32pc on Monday, while making advances against the kiwi, Aussie and sterling.

The New Zealand dollar hit a three-month low after the government introduced taxes to curb housing speculation, a move investors reckoned could allow the central bank to hold interest rates lower for longer with less risk of a property bubble.