CPEC to march forward as scheduled despite COVID-19 epidemic 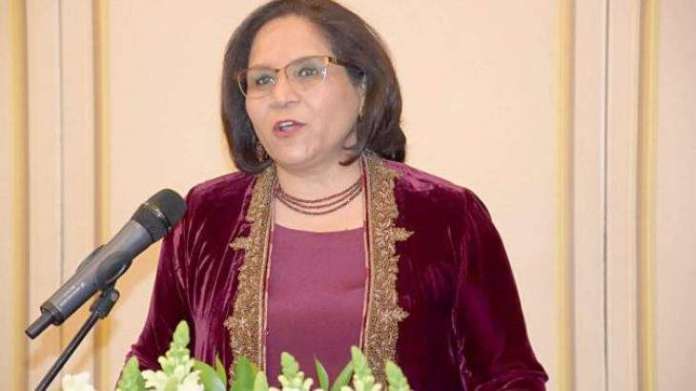 BEIJING: The China Pakistan Economic Corridor (CPEC) will continue its mutually beneficial march toward development, prosperity and win-win cooperation in line with the aspirations of the peoples of both countries, Pakistan Ambassador to China, Naghmana Hashmi said on Friday.

The CPEC is a long-term bilateral economic project encompassing a vast array of short, medium and long-term projects. Despite the COVID-19 epidemic, there has been no suspension of trade flows and transportation linkages between Pakistan and China, she told Global Times.

She said that the overall impact of the epidemic on the CPEC, if any, is therefore too marginal and meager to merit any serious afterthought. “Nevertheless, I have unshakable faith in our mutual ability to make up for lost time and complete all projects within stipulated timelines.”

“As businesses and trade are gradually resuming in China, I want to strongly negate negative and unfounded aspersions caused by some cynical growth trajectories of the BRI and the CPEC. I would like to solemnly assure that the CPEC will continue its mutually beneficial march toward development, prosperity and win-win cooperation in line with the aspirations of the peoples of both countries,” she added.

Ambassador Hashmi said that Pakistan and China are iron brothers, all-weather strategic partners and the closest of neighbours. “Our two countries enjoy a unique relationship unprecedented in the annals of world history.”

She remarked that this fabled friendship was forged in the crucible of time and has gone beyond the traditional parameters of a bilateral relationship. It has now transformed into a broad-based, long-term and strategic relationship which has set a new model for inter-state relations.

The CPEC as the flagship project of the Belt and Road Initiative (BRI) proposed by Chinese President Xi Jinping is an unmistakable symbol of this abiding friendship and occupies a pivotal position in the development agenda of Pakistan. The CPEC has immense strategic significance for Pakistan and has already helped Pakistan to lay a strong infrastructure for the subsequent development of our industry, agriculture and human resources.

She said that the viral infection presented a grave challenge for the Chinese government, causing a substantial loss of precious human lives and affecting business and trade and extended heartfelt condolences to the Chinese people and government for the loss of human lives as people fell victim to this deadly endemic.

She paid tribute to the indomitable will and courage of the people of Hubei in general, and the people of Wuhan in particular, for putting up a heroic fight against this challenge.

While the prevailing epidemic will definitely be eliminated very soon, the resolve and character shown by the Chinese people during this crisis will always serve as a source of inspiration for countless others, she added.

The Chinese government took immediate and effective steps to contain the spread of the epidemic to other regions of China. These steps were necessary to contain viral infection and kept it from becoming a global pandemic.

She said the COVID-19 epidemic was also a test for the relationship between Pakistan and China. “As an iron brother and most reliable partner, Pakistan decided to stand by China in its hour of need and we offered our utmost help and assistance to our Chinese brethren to fight this epidemic.”

In a show of unanimous support and sympathy for China, Pakistan did not evacuate its students from Wuhan and Hubei and donated essential protective equipment to China. The president and prime minister of Pakistan wrote letters of support to their Chinese counterparts and both houses of the Parliament of Pakistan passed resolutions expressing firm solidarity and support for the Chinese people and government.

She said that the ever-increasing economic and trade integration between Pakistan and China has made our two economies increasingly inter-dependent, especially in the context of the CPEC. It is satisfying to note that the Chinese economy has shown remarkable resilience during the entire crisis.

While some sectors of the Chinese economy have been negatively impacted by lockdown measures to control epidemic, these effects are ephemeral and manageable. The whole world looks forward to renewed and vigorous economic growth once the epidemic is completely eliminated in the not too distant future, she added.

“May I reaffirm to our Chinese brothers and sisters that China will always find in Pakistan a most reliable partner, iron brother and trusted friend that will stand by China, not only amid the tides of peace and prosperity, but also in storms of turmoil and turbulence,” she concluded.