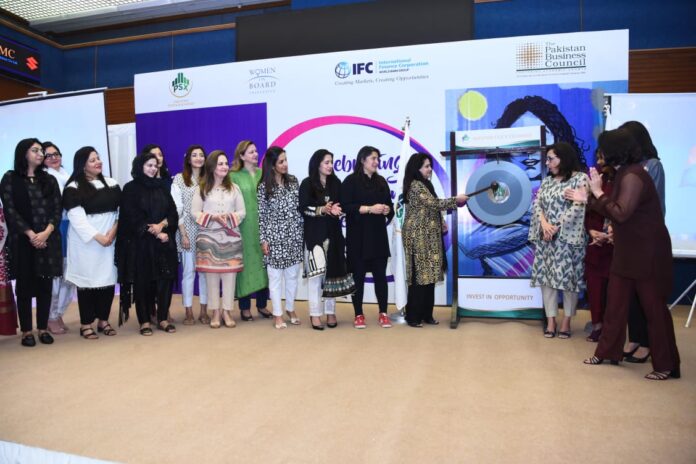 KARACHI: Eighteen Pakistani women professionals from various sectors of the economy rang the bell to open trading at the Pakistan Stock Exchange (PSX) on Tuesday morning.

The ceremony was part of a celebration of International Women’s Day, jointly organised by the PSX, Women on Board (WOB), International Finance Corporation (IFC) and the Pakistan Business Council (PBC).

Ring the Bell is an annual global gender initiative which encourages the private sector to expand opportunities for women as leaders, employees, entrepreneurs and consumers.

The PSX is now one 80 stock exchanges globally that participates. Ring the Bell has now been held for the fourth year at the PSX.

According to the World Economic Forum Gender Gap Index 2020, Pakistan ranks amongst the lowest ranking countries of the world in terms of equality and gender parity, coming in at 151 out of 153 countries.

Sadia Khan, the newly appointed SECP commissioner, said that she was committed to gender diversity particularly in boards. Many companies had asked for a relaxation of the SECP requirement to include at least one woman member on the board, she said.

Khan said that while there had been several provisions and backtracking in the year before, the SECP was committed to the goal and that backtracking on the matter was “certainly not going to happen on my watch”.

Dr Shamsad Akhtar reiterated the need for affirmative action in the private sector. She also said that the PSX must incentivise women in both urban and rural areas to raise capital.

“No broker should have a seat on the board unless he invests in rural women,” she said, adding that the exchange must implement affirmative action for rural women.

“There is no country that has prospered without the active participation of women. Sustainable Development Goal (SDG) 5 finally recognised this fact and has made gender equality a key development goal”, he said.

and women rights. This is reflected by the step PSX has taken, as a frontline regulator, by adding five percent weightage for diversity and inclusivity which includes having two or more women directors on the boards of listed companies for their candidacy for PSX Top 25 Companies Awards. Furthermore, a five percent weightage has been assigned for reporting on any two of the minimum 6 SDGs”.

Khan admitted that in terms of female employment, the exchange is not where it needs to be. Only 15 percent of PSX employees are female, though the percentage of women at more senior levels is higher, at 30 percent.  According to Khan, the first female trader on the exchange floor was employed in 1992.

Women on Board released its annual survey on the status of women representation on Pakistani corporate boards.

Aftab Ahmed Khan, the CEO of Women on Board, highlighted that 136 listed companies have independent women directors, compared to only 21 companies in 2016.

Ehsan Malik, the CEO of Pakistan Business Council and former CEO of Unilever Pakistan said that gender balance is a key pillar of focus for PBC’s Centre of Excellence in Responsible Business”.

Speaking of his personal experience of working at Unilever for 24 years, he said even the simplest things make a big difference, such as ensuring the construction of clean bathrooms for female distributors.

Shabana Khawar, Principal Country Officer of International Finance Corporation said that improvement in gender equality outcomes is an absolute must to boost private sector performance and improve economic growth. “Not only is it the right thing to do, it is also smart business,” she said.

The event also featured two panel discussions in which women professionals from different corporations addressed barriers for women in leadership positions, and also highlighted good practices for advancing gender equality at the workplace. Raeda Latif, GM Marketing and Business Development at PSX, said she was hopeful about the future with improved gender parity in Pakistan.

“Today I can see there is hope for women. It is encouraging to see that men around us treat us not as women but as professionals within our own domain.”