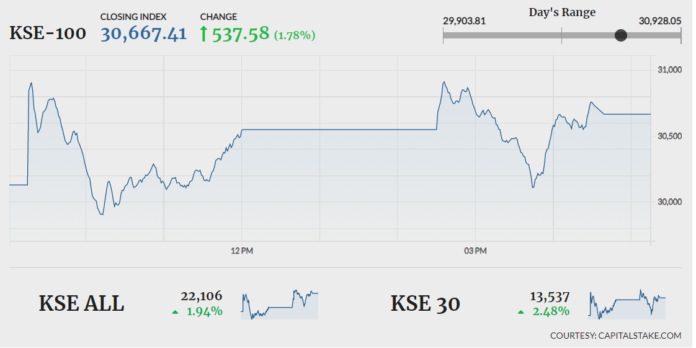 KARACHI: Stocks staged a handsome recovery after a volatile session on Friday, as the indices oscillated in both directions before closing with decent gains.

Foreign investors ended the previous session on Thursday as net sellers, with a net outflow of $5.36 million.

Among major developments that impacted global markets, oil prices recovered a little but remained below $30 per barrel. US benchmark West Texas Intermediate (WTI) was up 2.22pc to 25.78pc in the morning, while Brent eased 0.91pc to 28.21 a barrel.

On the economic front, Pakistan’s total liquid foreign exchange reserves dropped by $162 million to $18,743 million (as on March 13, 2020). The reserves previously stood at $18,905 million (March 6). Net reserves with SBP fell by $110 million on a weekly basis while net reserves with banks declined by $52 million.

Meanwhile, Pakistan Suzuki Motors Company Limited (PSMC -2.73pc) announced its financial performance for FY19. The company’s revenue shrunk by -2.76pc while the cost of sales inched up by 1.56pc, resulting in a 71.83pc YoY decline in gross profit.