No Ramzan bazaars in Punjab this year 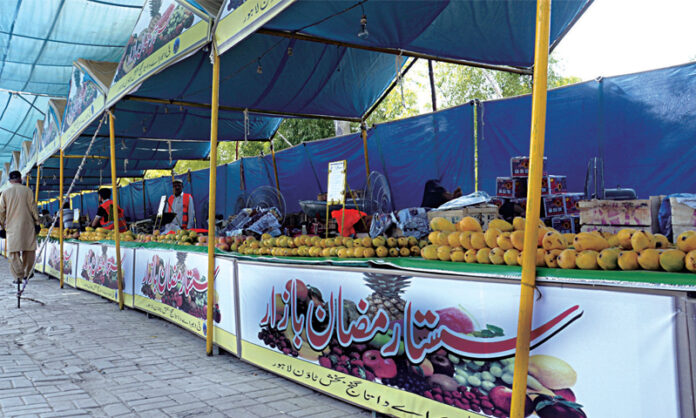 LAHORE: Punjab Chief Minister (CM) Sardar Usman Buzdar has recommended that ramzan bazaars should not be set up anywhere in the province this year due to the current situation of COVID-19.

The message was delivered by Food Minister Abdul Aleem Khan while presiding over a high level meeting of the Punjab Cabinet Committee on Wednesday which was attended by senior members of the Board of Revenue and secretaries of agriculture, industries, livestock and food departments.

The meeting was informed that the deputy commissioners (DCs) of 30 districts of Punjab had also voted against setting up ramzan bazars as the district administrations had their hands full due to wheat procurement and anti-coronavirus activities.

The food minister said that daily goods should not be sold through trucks and sale points but steps should be taken to provide direct relief to citizens in the shape of cash for which the chief minister will give his final approval on Thursday.

He said that direct relief would be given to the people at any cost. “However, we have to look at security measures at all times and life of no one can be put at risk,” he added.

Lauding the Ramzan Package, he said that it would benefit about two million families, i.e. 1.25 crore people, of the province.

Speaking at the meeting, Punjab Law Minister Raja Muhammad Basharat, Finance Minister Hashim Jawan Bakhat and Minister for Industries Mian Aslam Iqbal said that special steps must be taken to minimise the problems of the common man, especially in ramzan.

They agreed that no activity that could endanger one’s life should be held.

Various options, including direct cash relief, electricity bills etc. were discussed while the attendees of the meeting also submitted their proposals for possible relief in the month of ramzan.

The Cabinet Committee’s recommendations would be presented to the chief minister, following which, the district administration and other government institutions will be able to quickly distribute relief to the poor.