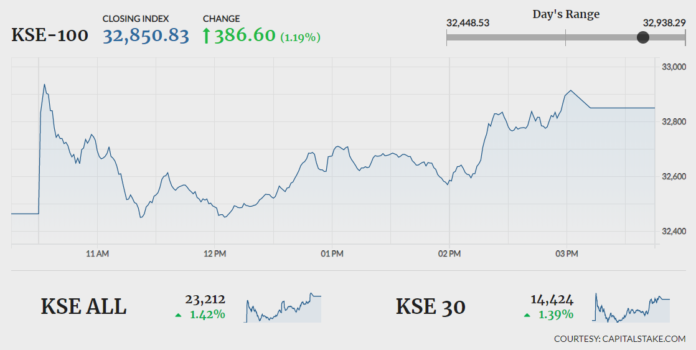 KARACHI: Bullish trend prevailed at the Pakistan Stock Exchange (PSX) on Thursday, with the benchmark KSE-100 managing to accumulate gains amid volatility.

“International crude price rebounded overnight for WTI to trade +15pc from its previous close; this helped the oil and gas stocks to hit upper circuits,” said an analyst at Arif Habib Ltd. “Sentiment on banking sector turned negative as the SBP directed the banks to conserve capital by not declaring dividends. On the other hand, the cement sector saw profit booking amid poor financial performance by some prominent players.”

On the financial side, Engro Corporation Limited (ENGRO +2.20pc) announced earnings per share of Rs1.35 for the first quarter of FY20, United Bank Limited (UBL +0.18pc) declared an EPS of Rs4.13 (along with a cash dividend of Rs2.50), while Pakistan Suzuki Motors Company Limited (PSMC +0.18pc) posted an EPS of Rs11.44.