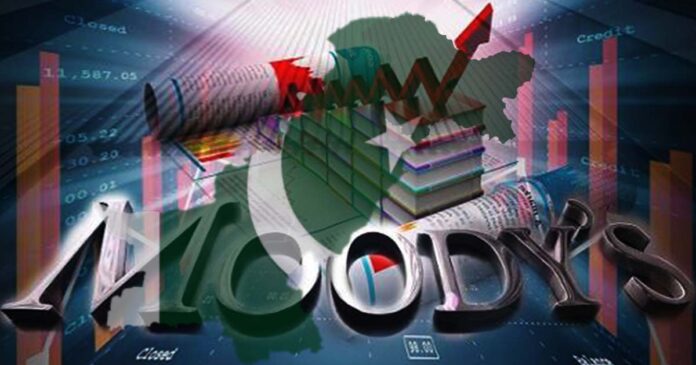 KARACHI: The International Monetary Fund’s disbursement of $1.4 billion to Pakistan is expected to reduce the country’s financing risks, said Moody’s Investors Service in a new report released on Thursday.

On 16th April, the IMF approved disbursement of $1.4 billion under its Rapid Financing Instrument (RFI). The financing supplements the assistance of $588 million committed by the Asian Development Bank and the International Development Association to support Pakistan’s response to the coronavirus outbreak. Additionally, G20 creditors also offered Pakistan bilateral debt relief.

“We expect that Pakistan’s financing needs will rise because of coronavirus-related economic effects and the government’s PKR1.2 trillion ($7 billion, 2.7pc of GDP) stimulus package, approved on 30 March,” said the authors of the report.

This is despite strong revenue growth, which helped narrow the deficit. The government’s revenue in the first half of this year rose almost 40pc from a year earlier, with tax revenue up by 18pc.

On a more positive note, some factors might help mitigate the effect of the contraction on the deficit, such as higher-than-budgeted central bank profits, lower-than-budgeted interest payments, and fiscal savings from lower oil prices.

The agency also said general government debt will rise to around 87pc of GDP by June 2020, from around 83pc in June 2019.

“Debt relief by official-sector creditors would provide additional but very modest spending capacity for Pakistan, whose interest payments on foreign-currency debt are around 0.6pc of GDP for fiscal 2021, with about one-third owed to bilateral creditors and another one-third owed to MDBs,” said the authors of the report.

Nationwide lockdowns from April 1 are expected to significantly curtail domestic spending. However, the government allowed labour-intensive industries such as agriculture, construction and textiles to resume operations on April 15, which should aid a gradual recovery in domestic consumption.

The report maintained that the central bank’s cumulative 425-bps policy rate cuts, as well as refinance schemes, should help buffer the economic shock.