PIA flight with 99 on board crashes in Karachi 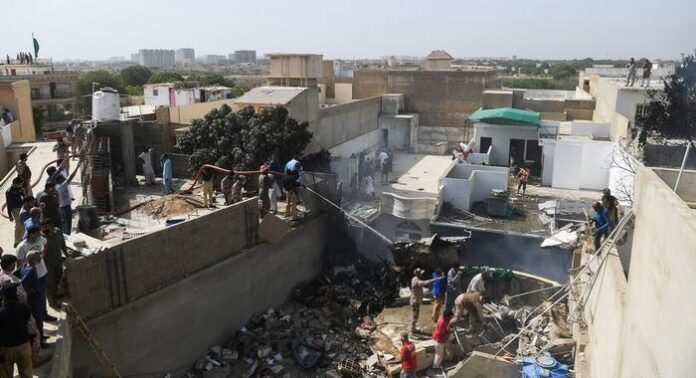 –CAA officials cite ‘technical problems’ as reason behind the crash

KARACHI: A Pakistan International Airlines (PIA) plane with 99 passengers and crew crashed into a residential area of Karachi minutes before landing, with many feared dead.

“The areoplane [flight PK 8303] first hit a mobile tower and crashed over houses,” witness Shakeel Ahmed said near the site, just a few kilometres short of the airport.

The jet, which tracking website FlightRadar24.com identified as a 15-year-old Airbus A320, took off from the eastern city of Lahore to Karachi on Friday just as the country was resuming domestic flights in the wake of the coronavirus pandemic.

“The last we heard from the pilot was that he has some technical problem,” the state carrier’s spokesman Abdullah H. Khan said in a video statement. “He was told from the final approach that both the runways were ready where he can land, but the pilot decided that he wanted to do (a) go-round … It is a very tragic incident.”

Talking to a foreign media outlet, one senior civil aviation official said it appeared the plane was unable to open its wheels due to a technical fault prior to landing, but it was too early to determine the cause.

It was also learnt that there has been no permanent Civil Aviation director general for the last two years.

Meanwhile, it has been confirmed that Bank of Punjab (BoP) President & Chief Executive Officer Zafar Masud as well as Urban Unit CEO Khalid Sherdil were also on the ill-fated flight that crashed in Karachi.

According to sources, Masud and Sherdil were taken to Combined Military Hospital (CMH) in Malir Cantt, where they are receiving treatment.

Sources said both the passengers were sitting in the front row of the plane on seats 1C and 1F, respectively.

According to various unconfirmed reports, anywhere between 14 to 40 passengers have survived.

Pakistan’s army and rescue services rushed to the site, which appeared to be a densely populated area.

“The pilot was told that he could land at the Karachi airports, he was told that both the runways were ready, but he took a circle and gave a MayDay call before the crash,” another civil aviation official said.

“We don’t know yet whether he gave any reason at the time of the MayDay call.”

In Pakistan’s most recent deadly crash, 47 people died when a PIA jet smashed into a mountainside in Khyber-Pakhtunkhwa province in 2016. The country’s worst plane disaster came in 2010 when an AirBlue flight crashed killing 152 people near Islamabad.

“Shocked & saddened by the PIA crash. Am in touch with PIA CEO Arshad Malik, who has left for Karachi & with the rescue & relief teams on ground as this is the priority right now,” tweeted Prime Minister Imran Khan. “Immediate inquiry will be instituted. Prayers & condolences go to families of the deceased.”