Daily items being sold above govt rates in most parts of the country: Weekly Price Monitor report 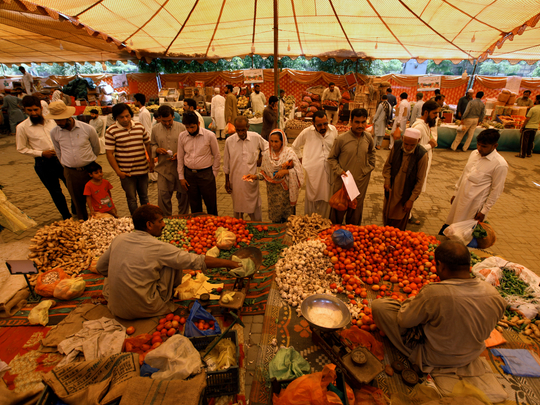 The official prices of mutton, beef and chicken were not enforced in more than a third of the surveyed districts across the country, and commonly used vegetables such as potatoes, onions and tomatoes, were sold at prices higher than officially notified rates in half of the regions, while wheat flour was sold at higher prices in a quarter of the districts and sugar in a third.

This report by the Weekly Price Monitor surveyed the prices of 15 essential grocery items, on July 23, in 43 cities; 14 in Punjab, 12 in Balochistan, 12 in Khyber Pakhtunkhwa, and 5 in Sindh. A comparison between market prices during the last two weeks showed a changing trend in the market prices of essential commodities. The prices of chicken and tomatoes generally went down, while sugar, wheat and onion rates shot up.

Among the 29 regions – seven in KP, five in Balochistan and two in Punjab – an increase of 1 percent (Rs10) to 14 percent (Rs150) was recorded in wheat prices. Lahore and Multan also registered an increase in the wholesale rates of wheat flour over the same time period. The market prices in these two districts were Rs140 to Rs220 higher than the official rates. In three regions – Lower Kohistan, Mardan, and Khushab – while the market price of wheat recorded a slight slump, it still remained much higher than the official rates. The remaining 12 districts did not record any change in this period.

The price of sugar showed an 8 percent (Rs7) decrease in Lasbela, whereas in 18 districts it underwent a notable surge of up to 13 percent (Rs10).

On the other hand, the market price of chicken saw a fluctuating decrease from 2 percent in some areas to 41 percent in others (Rs4 to Rs115) in 17 districts, mostly in KP and Punjab. However, in seven areas, mainly in Sindh and Balochistan, it went up as much as 45 percent (Rs90). However, in five Balochistan districts, poultry prices remained stable.

Among vegetables, the market price of potatoes was mostly stable except for the mountainous districts of KP and some regions of Balochistan, where they recorded an up to 33 percent (Rs20) hike. Onion prices witnessed a 14 percent (Rs5) to 169 percent (Rs44) rise in 13 district — four each in Punjab and KP, three in Balochistan and two in Sindh. But, the prices of tomatoes declined in many areas, with the highest drop witnessed in Washuk at 58 percent (Rs70).