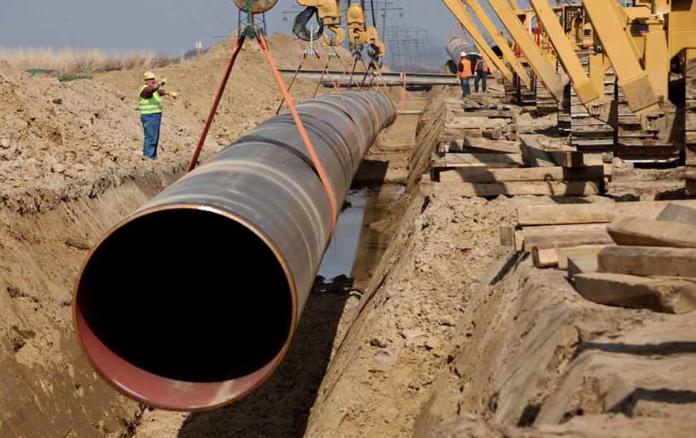 ISLAMABAD: Pakistan and Russia are likely to sign a commercial agreement for the construction of the 1,100-kilometre North-South Gas Pipeline (NSGP) within 30 days.

The government has planned on taking action regarding the NSGP project to ensure transport of 1.2 billion cubic feet per day (BCFD) of Regasified Liquefied Natural Gas (RLNG) from Karachi to Lahore, sources said, adding that work on the project will commence in six months.

They said that the Petroleum Division created a joint venture with Russia wherein it retains 51-80pc equity. It will fund a large portion of the debt from the Gas Infrastructure Development Cess (GIDC) funds, and start land acquisition right away. A decisive meeting between Pakistan and officials from Russia is likely to be held during September to decide the fate of the NSGP project, they added.

Sources said that following a decision of the Supreme Court (SC) regarding the Gas Infrastructure Development Surcharge (GIDS), the Petroleum Division has been considering various options to ensure the construction of NSGP as the GIDC amount can only be spent in gas infrastructure projects. If the government fails to initiate any gas infrastructure project during the next six months, then the GIDS Act will be invalidated as per the apex court’s order on GIDC.

It has been learnt that the Petroleum Division has sought advice from the Law Division regarding the GIDC, including time constraints, expandability, and consumer billing and refund policies.

An agreement between Pakistan and Russia was previously signed on October 16, 2015, for the development of the NSGP from Karachi to Lahore.

According to documents, the proposed pipeline will be laid with a 42-inch diameter and will have the capacity to transport 1.2 BFCD of RLNG.

RT-Global Resources (RT-GR) and Inter-State Gas Systems (ISGS) were nominated as project developers under the agreement. ISGS is responsible for the provision of land rights and security whereas RT-GR is responsible for financing, designing, constructing and operating the project. Phase-I of NSGP is to be completed by December 2022 and phase-II is to be completed by December 2023.