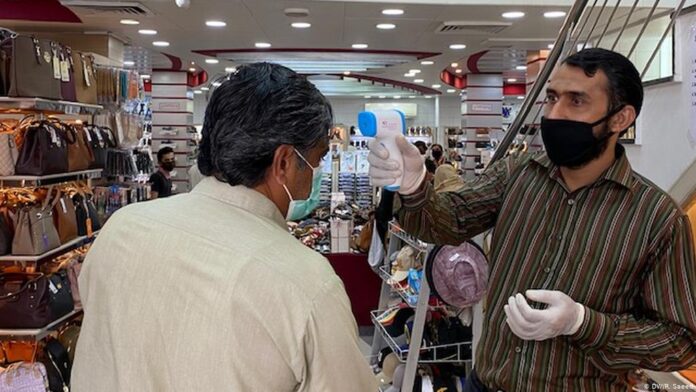 ISLAMABAD: Pakistan’s economy showed positive momentum after a decline in coronavirus cases in the country, Bloomberg reported on Monday.

The economic journal said Pakistan is showing signs of business activity picking up at a faster clip, “as worries about new Covid-19 infections fade in an economy that contracted for the first time in seven decades”.

“Evidence of momentum returning can be seen from growing cement-to-fuel sales and demand for home appliances to cars,” the Bloomberg report stated.

Cement sales rose 38pc from a year ago to 4.8 million tonnes in July, and near a record level seen in October.

A government programme to give amnesty to tax evaders, provided they fund construction projects, is expected to fuel activity — and demand for cement — as work resumes after the lockdown.

IGI Securities research head Saad Khan said, “We expect dispatches to continue their rising run moving forward because of tax measures. Substantial decline in interest rates and mandatory targets given for banks to increase housing and construction financing to at least 5pc of private sector credit will also help.”

Gasoline sales in June rose to a record high as people return to work after lockdown measures eased in May. Sales have stayed elevated in July and August.

Fuel for power generation has increased as well. Fuel oil sales rose in June to the highest in a year while LNG spot cargo purchase resumed in June after a six-month hiatus, said the economic journal.

Local car deliveries have recovered to about 10,000 units after four months as the end of lockdown ushered in new demand. Kia Motors Corp.’s local unit is planning to add a second shift at its factory in Karachi from January.

Manufacturing output improved for a second consecutive month in June. The overall recovery in large-scale manufacturing will likely be stronger in the October-to-December quarter with worldwide demand picking up.