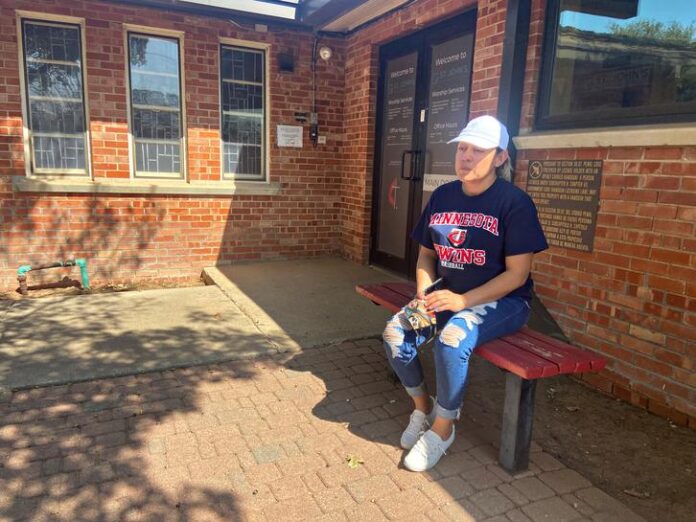 Some places were closed, others had nothing available. Outside the shuttered St. John’s United Methodist Church, Padilla, 50, recounted her struggle to survive during the economic disaster that the novel coronavirus pandemic had dumped upon her, choking words out through tears of fear and frustration.

Like many Americans, Padilla is barely getting by and says she desperately needs government help. She received a $1,200 check in April from the Coronavirus Aid, Relief and Economic Security Act passed by the U.S. Congress and signed by President Donald Trump on March 27.

The check helped her pay back rent she owed and she and others are hoping that lawmakers and the Trump administration can reach accord soon on another relief package after months of disagreements.

“We’ve got some potatoes and beans at home. A bit of flour for tortillas. We’re just trying to make that stretch,” said Padilla, whose business selling food to construction workers ended with the pandemic and her daughter last month lost her job in retail sales.

“A new stimulus check would really mean the world to me right now.”

After March’s shutdowns to curb the spread of the virus, unemployment in the United States shot to levels here not seen since the Great Depression. Many jobs returned as parts of the economy reopened, and consumer spending rebounded, thanks in part to the $2.2 trillion stimulus bill.

Now that cash, paid directly to individual Americans and small businesses to pay workers, has dried up. Long-term unemployment is climbing because entertainment and travel industries are starting to permanently here lay off furloughed workers.

Republicans and Democrats in Congress, where members’ median wealth is over here $1 million, have been unable to agree on how much new cash the federal government should give out, who it should go to, or how any new bill should combat the virus that has killed more people here in the United States than any other country.

In the space of a few days last week, Republican Trump abruptly called off talks until after the Nov. 3 election in which he is seeking re-election, then urged his team on Twitter to “go big” and then on Friday offered a $1.8 trillion package, closer to the Democrats’ $2.2 trillion proposal.

Without a new stimulus bill, the U.S. economy will “stall” in the fourth quarter of the year, Oxford Economics said, putting the country in a “perilous situation.”

Padilla and others are already in a perilous situation.

Emma Bijil in Chicago has been forced to go to a food pantry for the past few months after being laid off from a health care job. She is pregnant and struggling to keep herself and three daughters fed.

“I have to do what I have to do to survive,” said Bijil, 37, as she sat in her car, waiting to pick up some groceries. “I’ve never been to a food pantry before, but as long as my children are fine, I will eat a rat’s ass if I have to.”

The $1,200 government check helped with one month of rent, but she said government assistance needs to be much more substantial and last longer.

Others are finding themselves in an uneasy limbo, hoping their former life will return, but with no clear idea when that could be.

When Leo Valladares, 25, got furloughed from his job as an American Airlines flight attendant on Oct. 1, the first thing he had to figure out was where to live.

He’d been stationed in Miami for the past six months and wanted out, but not home to Texas where his mom had just lost her job and health insurance. “I had been exposed so much,” to the virus, he explained.

So he flew to Chicago, where he’d lived before and where American had agreed to transfer him, and moved full-time into a “crash pad” where flight attendants often stay during days off. He’d saved $9,000 over the summer after American warned employees they might be furloughed.

Now, for $350 a month, he rents a bunk bed in a giant house where 20 of his colleagues sometimes pass through. He’s applied to jobs at McDonald’s, WinCo Foods, Best Buy, and elsewhere, and been told he is both over- and under-qualified.

Valladares calculates his savings might last six months, if he walks everywhere instead of spending three dollars on bus fare and buys frozen chicken drumsticks in bulk and apportions them out weekly.

Donald Harper, 55, once a sought-after chef for the hotel restaurants that catered to visitors at Florida’s Disney World, Universal Studios and other parks, saw his clients and his paycheck vanish when the pandemic shuttered hotels and parks.

His signature four meat and six cheese lasagna made him popular among hoteliers’ kitchens, and helped earn him about $4,800 every two weeks – “not bad for a working man” as Harper says.

But now Harper scrambles to pay rent in Orlando and have groceries for himself and his nine children.

Harper said he drew $275 a week in unemployment insurance “plus whatever I can hustle with cake and cupcakes on the side.”

He operates out of his small home kitchen.

Late last Friday he was finishing up a 5-tiered wedding cake – a confection stacked with layers of blue velvet, red velvet and orange cream, his specialty.

“I’ve paid decades worth of taxes, it’s time the government turned it back and help the people,” Harper said.

“If I could, I’d say Mr. President, people are hurting right now. My family is hurting. There’s no more time to play around. We need your help.”