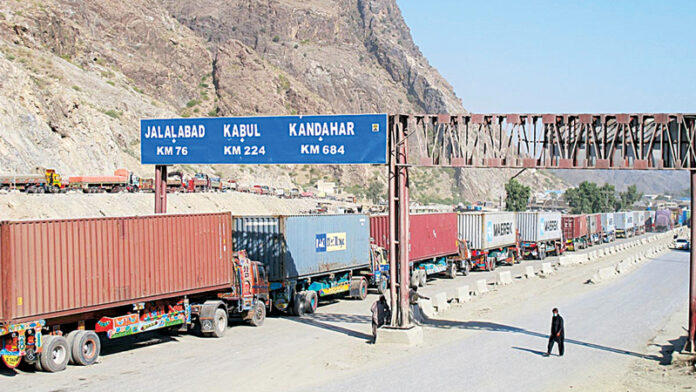 PESHAWAR: The Sarhad Chamber of Commerce and Industry (SCCI) has expressed concern over the imposition of a new visa/passport condition on drivers carrying Afghanistan-bound consignments via Torkham border.

In a statement issued on Friday, the chamber opined that the new condition would prove detrimental for mutual trade between Pakistan and Afghanistan, and that it needs to be withdrawn immediately.

It may be noted that the interior minister had made mandatory a valid passport/visa for drivers transporting goods’ vehicles to Afghanistan via Torkham border from February 20. Instructions were also issued to the border management in this regard.

SCCI Senior Vice President Engineer Manzoor Elahi feared that the Pak-Afghan bilateral trade volume, which currently stood at less than $1 billion, would deteriorate further if the government did not review its trade policies.

He reminded the government that Afghan Transit Trade Agreement (ATTA) 2010 would expire on February 11, 2021, while no progress/consultation on signing a new ATTA agreement has been made yet.

“On top of this, the FC stationed at Torkham border has now issued instructions to customs authorities to disallow drivers and cleaners of goods to cross the border without having valid passport and visa after Feb 20. This is highly worrisome and unfavorable for bilateral and transit trade between the neighbouring countries,” he stated.

Lamenting the lack of consultation with business community on trade issues, Elahi demanded the government to immediately withdraw the visa condition keeping in view best interests of the business communities of both countries.

He also asked the government to take relevant stakeholders on board before signing the new ATTA so that it could have a long-lasting impact on Pak-Afghan bilateral and transit trade.