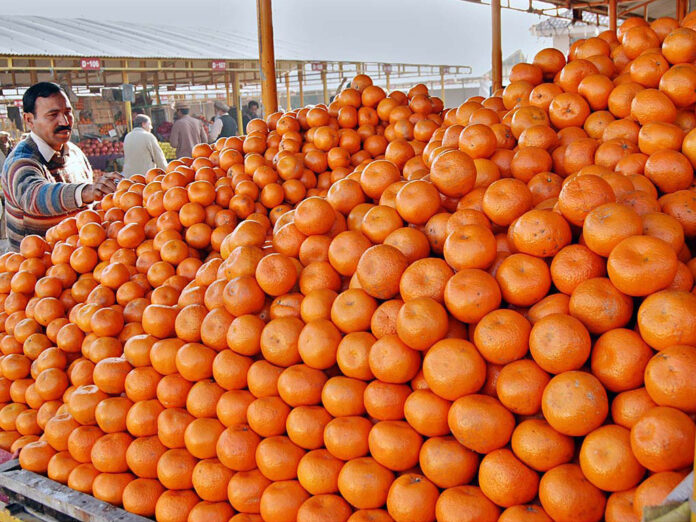 ISLAMABAD: Pakistan has achieved a new record by exporting 460,000 metric tonnes of Kinnow during the season in the year 2020-21, making it the highest ever exported volume by the country in history.

During the COVID-19 pandemic, the demand for Kinnow surged significantly because of its therapeutic features that play a vital role in strengthening the human immune system and safeguarding against the deadly disease (Covid-19).

According to details, during the export season that concluded in April 2021, Pakistan exported 460,000 metric tonnes of Kinnow to 40 countries, which was 30% higher compared to the last year’s export volume of 353,000 tonnes. Foreign exchange earned through the exports was $253 million.

According to the data shared by All Pakistan Exporters, Importers and Merchants Association (PFVA), the export target of Kinnow for the year 2020-21 was 350,000 tonnes which was expected to fetch $210 million for the country.

The estimated value of Pakistan’s Kinnow industry is Rs125 billion. The industry, however, faces numerous challenges which include outdated orchards having less resistance against various diseases, low-quality seeds, problems of poor cosmetic look, limited varieties, besides a short export window season of three to four months. The existing export of Pakistani Kinnow can be enhanced to a billion dollars within a few years by effective implementation of the policy, as highlighted in the Horticulture Vision-203.

According to Waheed Ahmed, head of PFVA, all the concerned departments like customs, seaports authorities, quarantine department and Ministry of Commerce (MoC) deserve appreciation for playing a very supportive role, enabling the PFVA to attain the highest export volume of Kinnow.

However, despite the record exports of Kinnow, exporters sustained huge financial losses since the exports’ orders materialised at the exchange rate of one dollar equivalent to Rs168, while by the time payment was to be made to the exporters, the rupee devalued to Rs153 against the dollar. Keeping this in view, the exporters were faced with an option to contain the export volume of Kinnow or sustain financial losses

“However, due to the deplorable state of the country’s economy, the exporters kept the interest of the country above on their own interest to fetch much-needed foreign exchange for the country,” Waheed said.

Moreover, according to him, Pakistani Kinnow could not get a fair price due to the lockdown in international markets, while a disproportionate increase in the cost of freight further multiplied the huge financial losses significantly.

“The highest loss was sustained in the Russian market,” he added.

The PFVA head commended the efforts of Advisor to Prime Minister on Commerce Razzak Dawood and concerned government departments who rendered all possible assistance to the exporters and responded promptly, more than often resolving the issue being a barrier to the export in less than 48 hours.

“The timely issuance of the Phyto-certificates during the lockdown and permitting smooth movement of exports’ consignment by reducing the time of inspection by the Ministry of National Food Security and Research (MNFSR) and the Department of Plant Protection (DPP) also contributed to the increase in exports,” he said.

The association also praised the efforts of Foreign Minister Shah Mahmood Qureshi for getting the consent of the Iranian government to withdraw the ban on the export of Pakistani Kinnow which would further enhance the export of the fruit in the future as this market can accommodate the export volume of more than 80,000 tonnes.