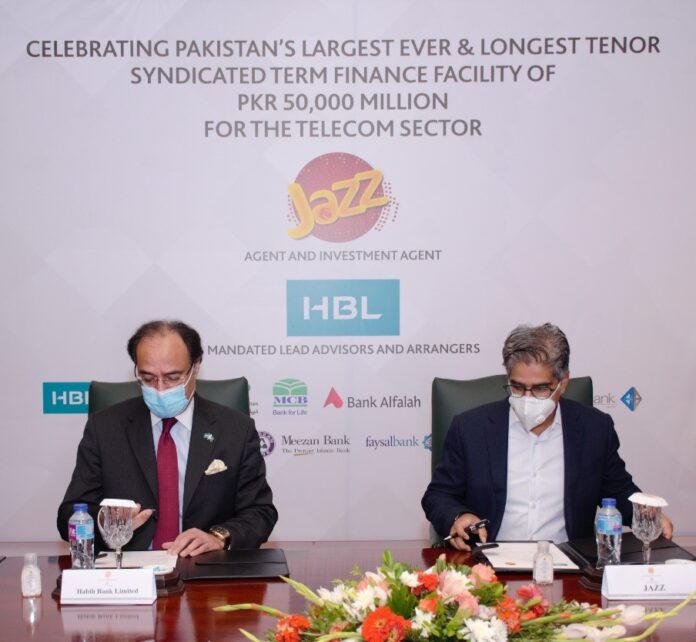 ISLAMABAD: Jazz has secured a Rs50 billion syndicated credit facility from a banking consortium led by HBL. This 10-year facility will be used to finance the company’s ongoing 4G network rollouts and technology upgradation.

As the country’s leading digital services provider, Jazz has over 69 million subscribers and more than 28 million 4G users nationwide. Over a period of two years, the company has invested USD 462 million on 4G infrastructure. The Pakistan Credit Rating Agency Limited (PACRA) has also recently upgraded Jazz’s long-term rating to ‘AA’ with a stable outlook, depicting the company’s strong financial depth in the industry.

HBL, Pakistan’s largest bank, was the first commercial bank to be established in Pakistan in 1947. Over the years, HBL has grown its branch network to over 1,650+ branches, 2,100+ ATMs and 54,000+ Konnect by HBL agents (branchless banking platform), serving over 23 million customers in 14 countries across the world.

“We continue to drive the digital Pakistan agenda by improving digital infrastructure, bridging the digital divide and focusing on financial inclusion. We are enabling societies by investing in entrepreneurship, digital skills and literacy. This facility is an integral step
towards ensuring that people are not bound by the limitations of geography, gender, or socioeconomic background, in harnessing the power of the internet. A transaction of this size is a testament to the trust the financial community has on Jazz’s strong financial profile and its leadership position in the telecom industry,” said Gabor Kocsis, chief financial officer at Jazz.

HBL President and CEO Muhammad Aurangzeb, commenting on the occasion, stated, “We are delighted to have led this landmark transaction in the Telecom sector. HBL has a long-standing relationship with JAZZ spanning more than two decades. For the Bank,
such transactions serve HBL’s strategic priority of supporting the promotion of digitalization across the country, while underscoring HBL’s commitment to stand by the robust and progressive Telecom sector of Pakistan.”

KARACHI: HBL today declared a consolidated profit before tax of Rs 46.4 billion for 9M’21, a growth of 8% over the same period last...
Read more
FEATURED

After nearly a century of success, Mahmood Group embarks on a retail dream