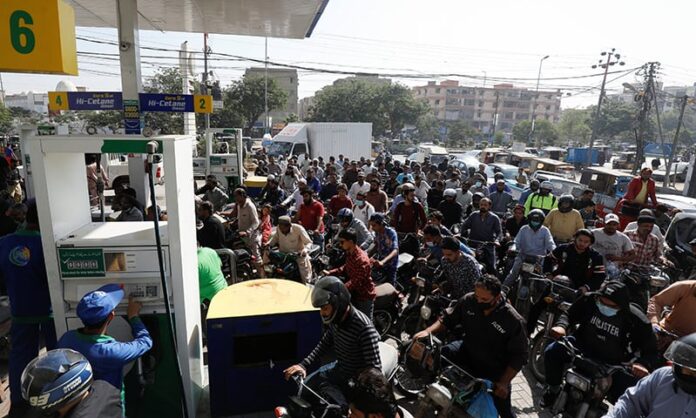 ISLAMABAD/LAHORE/KARACHI: The All Pakistan Petrol Pumps Dealers Association late Thursday called off its nationwide strike following reaching a deal with the government’s team for increase in the dealers’ profit margin.

Per media reports, the officials of the ministry of energy and the association’s chairman, Abdul Sami Khan, reached an agreement after holding day-long negotiations. Adviser to the Prime Minister on Finance Shaukat Tarin, Energy Minister Hammad Azhar and Petroleum Secretary Dr Arshad Mahmood were part of the government team.

Association spokesperson Jahanzaib Malik confirmed about calling-off the strike after the agreement. He said that they had initially demanded a six per cent increase in their profit margin, but the government had agreed to a 4.4pc raise.

He said that petrol dealers were charging Rs3.91 per litre and would now charge Rs4.90. He said that the price of petrol would be increased after the government announced the rates for next month.

Malik said that agreement would be implemented from next month, adding that the government had vowed to review the profit margin after three months.

The Pakistan Petroleum Dealers Association’s (PPDA) went on a nationwide strike Thursday lamenting low-profit margins, exacerbated by the government’s move to raise taxes and boost revenue under its agreements with the International Monetary Fund (IMF).

According to PPDA, the government has so far not made any contact with the association for negotiations.

Speaking with Profit, PPDA Information Secretary Noman Ali Jutt said that the association has vowed to keep petrol pumps closed till their demand of an 6 per cent in profit margin was met, adding that the PPDA will not trust verbal assurances by the government.

“The government promised to send a summary to the federal cabinet’s economic coordination committee (ECC) on November 3 while the association had earlier made it clear to that demands must be met by November 17,” Jutt said. He expressed satisfaction at the majority of petrol pumps observing a complete strike and closing oil supply for consumers across the country.

It is pertinent to mention here that large crowds of drivers, with their cars and motorbikes, gathered at petrol stations in main cities, including Lahore and Karachi overnight, ahead of the strike which began at 6:00 am on Thursday.

In Punjab’s provincial capital, petrol pumps remained closed at various places as citizens faced difficulties whereas the district administration claimed that fuel was available at 62 stations in the city.

Mohammad Haseeb, who had come to fill up his car at a PSO petrol pump near Cavalry Ground, said that there was uncertainty everywhere. “The government is increasing the price of petrol while sellers are insisting on increasing their profits. The common man will be the only one to suffer this loss in the end,” he lamented.

Due to the closure of popular petrol pumps Lahore, the business of shops selling petrol illegally flourished and in some areas including Nishat Colony, Nishtar Colony, Ghaziabad Main Bazaar, Bhatta Chowk, where petrol was being sold at Rs200 to Rs250 per liter.

“Because I could not get petrol for my motorbike at night due to heavy rush, I was forced to buy a liter of fuel from a shop in the market for Rs215 in the morning; the was asking for Rs300 and I had to haggle,” Ali Butt, a resident of Nishat Colony, informed.

Similar scenes were witnessed in Peshawar, Quetta, Azad Kashmir and other cities where most pumps were found closed and the few that remained open witnessed long queues of the vehicles, traffic jams, brawls, and panic buying.

On the other hand, Energy Minister Hammad Azhar said that the government was open to entertaining legitimate demands but warned that those seeking a nine rupee raise will be disappointed. “Such a high raise cannot be granted just to benefit a few companies,” he added.

“We are aware of the difficulties faced by petrol pump owners; however, they should reconsider their decision in light of the plight of the people,” Hammad said.

He said that a summary for an increase in profit margins was already sent to the federal cabinet’s ECC whereas the matter was likely to be resolved in the next meeting.

Officials of the Petroleum Division on condition of anonymity said that they are in touch with the dealers’ association and negations are underway secretly. “Hopefully, the association will call off the strike call as the government has been assuring its willingness to increase their margin.”

Meanwhile, Oil and Gas Regulatory Authority (OGRA) spokesperson Imran Ghaznavi said that the authority is in touch with all companies to ensure the uninterrupted supply of petrol.

“OGRA teams are in touch with stakeholders to ensure uninterrupted supply petroleum products,” he concluded.