After a very good year by its own standards, things are a little cloudy 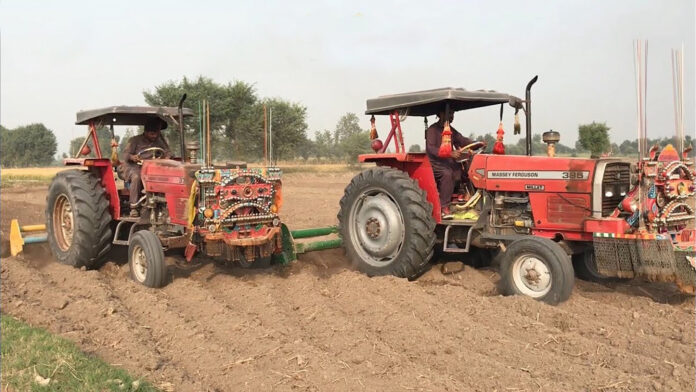 Millat Tractors had a very good year even by its own standards. The company’s unconsolidated net profit after tax stood at Rs5.78 billion in fiscal year 2021, which was an astonishing growth of 169% year-on-year. And already in the first quarter of 2022, its earnings grew by 16% year-on-year to Rs1.3 billion.

How important is agriculture to Pakistan? The sector contributes 18.5% to the country’s gross domestic product (GDP) and employs 38.5% of the national labour force. Even our state emblem is made up of four crops: jute, cotton, wheat, and tea. Yet for a country that prides itself on its agricultural base, we do not have enough of the one machine one really needs: a tractor. According to the Pakistan Economic Survey of 2019-2020, there are only 634,000 tractors operating in Pakistan. This, however, is a significant increase from when there were only 35,700 tractors in 1975, 157,300 tractors in 1985, 252,000 tractors in 1994, and 401,700 tractors in 2004.

Granted, this is an improvement from the decades before, this still means that the penetration of tractors in Pakistan is only 0.9 horsepower per hectare of cultivable land. Compare that to the required power of 1.4 horsepower per acre, meaning there is a shortfall of 0.5 horsepower per hectare. Now, from July 2018 to March 2019, the total tractors’ production in the country stood at 37,399. Of that, a substantial 64% was produced by one company alone: Millat Tractors.

Millat has always had a bit of a headstart when it came to tractors. Started in 1964 in Lahore, it is the authorized manufacturer of the American Massey Ferguson tractor in Pakistan. The company was nationalized in 1972, and made a part of the Pakistan Tractor Corporation (PTC).

The PTC started an indigenisation programme in 1980, and got Millat Tractors on board to set up engine assembly plants in Pakistan. To this day, that programme has been successful: the tractor industry has achieved 95% of localisation in production.

As a result, this has led to cheap tractors when compared to tractors around the world, but is still unaffordable for the majority of farmers in Pakistan. As has been previously locally reported, most farmers find it difficult to invest in a tractor given that the average size of their farm is quite small for the purchase of a tractor to make sense. In addition, rates on loans from banks have not been generous in previous years, thus deterring more farmers from owning their own tractor.

And the numbers were reflected in Millat Tractors as well. In fiscal year 2021, the company sold 35,527 tractors, depicting a growth of 70% year-on-year. And in the first four months of fiscal year 2022, the company sold more than 10,700 tractors, growing by 5% year-on-year. Among the total sold volumes, around 45% of the contribution was from bigger tractors (more than 60HP) while around 55% of the contribution was from smaller tractors (less than 60HP).

In a recent analyst briefing meeting, Millat Tractors said the affordability of the farmers this year is higher than previous years due to bumper yields in crops. This in turn may ignite another wave of tractor sales in upcoming months. To capitalize on the growing market, the company plans to increase its product range by introducing 100HP tractors for bigger farm sizes.

Still, the picture is not all rosy. For instance, the company expects export sales to remain under pressure in fiscal year 2022 as  trade activities with Afghanistan are currently under a halt. Then, the tractor industry is currently being charged a GST of 5% which may increase to 17% in the near future to meet the conditions of IMF. This may adversely impact the volumes of Millat. A hike in interest rates is also expected to slow down the demand for tractors in the coming months.

And while the localization level of Millat currently stands at 92%, the company is still exposed to foreign exchange risk since the base raw materials of the localized parts are mostly imported.

Still, Millat is banking on its early investment in Hyundai Nishat Motors. The company currently has an 18% stake in Hyundai, with an investment of Rs1.3 billion. The company’s management said it expected fruitful results from this strategic investment when the Hyundai brand matures in Pakistan. The global shortage of semiconductor chips, however, is currently hindering the growth of the company.