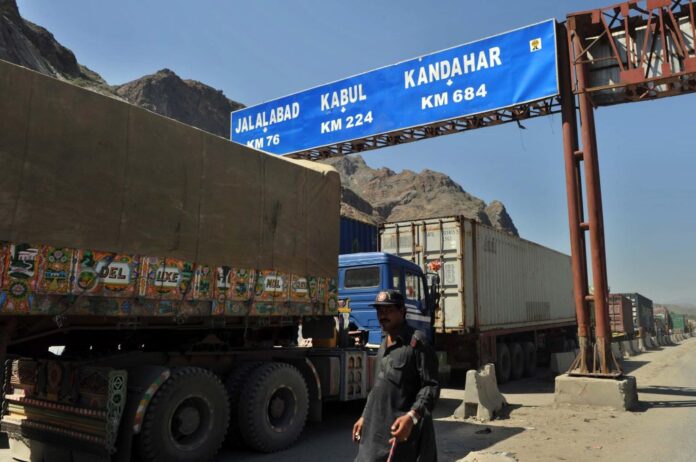 PESHAWAR: Trade between Pakistan and Afghanistan is on a constant decline because the of hurdles created by different government departments at the Torkham border crossing.
According an exporter Muhammad Aamir, traders face difficulties due to different laws for trade with Afghanistan at various borders crossings.

“At Karalachi, a vehicle carrying rice is cleared for $4,000 while at Torkham, the clearance costs $15,000,” he said, adding that such issues don’t just affect Pak-Afghan trade but also reduces the government revenue in addition to incurring losses to traders.He said that exporters are also braving through heavy losses being caused by the purchase of dollars from the open market and its deposits in banks.

According to Aamir, due to the financial crisis and closure of a banking system in Afghanistan, the flow of money to Pakistani traders from the neighbouring has stopped, resulting in a 60 per cent reduction in orders for goods to local traders.
On the other hand, remaining exports are vanishing slowly due bottlenecks at crossing points.
Another exporter Abid Khan said that the major hurdles in the way of export to Afghanistan are created by national logistics cell (NLC). He said that despite scanning the goods, NLC officials open trucks to manually check export goods as they don’t trust on their own scanners.
“NLC charges Rs3500 from each export vehicle, including Rs1000 for scanning. Despite taking this money, officials open stocks in our trucks which not only damages goods but also causes unnecessary delays,” he lamented.
Pakistan’s exports to Afghanistan include rice, fish, vegetables and other food items whereas from Afghanistan, fruits including apples, pomegranates, grapes, dried fruits, soup stones in addition to coal which the government has also allowed now is brought into the country.
At present, barely 200 export vehicles are cleared to go to Afghanistan while around 300 vehicles are cleared to enter Pakistan from the other side despite the government’s permission to open the border 24/7.
“Undue delay in clearance of vehicles is a question mark over the performance of government departments,” Abid Khan said.
Zia-ul-Haq Sarhadi, provincial president of Khyber Pakhtunkhwa Customs Clearance Agent (KPCCA), said that these problems will continue to harm traders and exports until the government ends the unnecessary interference of various departments.
He urged the government to revive the Pak-Afghan transit trade and take all stakeholders into confidence to finalise the Afghanistan Pakistan Transit trade agreement (APTTA) at its earliest.
Sarhadi further said that in the last two months, a delegation led by Pak-Afghan Chamber of Commerce (PACC) President Khan Jan Alokozai had visited Pakistan twice to resolve the problems on the Pak-Afghan border. He said that these meetings were held with representatives of FIA, NLC and Ministry of Commerce wherein Customs officials had assured that the border would be free of issues being faced by exporters.
“Traders do not have a problem with Customs officials but other unrelated government agencies that are checking vehicles without a proper system in place,” he informed.
According to Zia-ul-Haq, the government should immediately issue instructions to the agencies at the border to work within its jurisdiction. He warned that if the situation continues, Pak-Afghan trade will completely be wiped out in the matter of a few years.
NLC representative Abdul Sattar was contacted several times to respond to the allegations leveled by traders and clearing agents but he did not respond.
- Advertisement -
Facebook
Twitter
Linkedin
WhatsApp
Email
Previous articleCrude oil prices fall 2.77pc for fourth week in a row
Next articleBitcoin surges to $49,105 after Saturday bloodbath