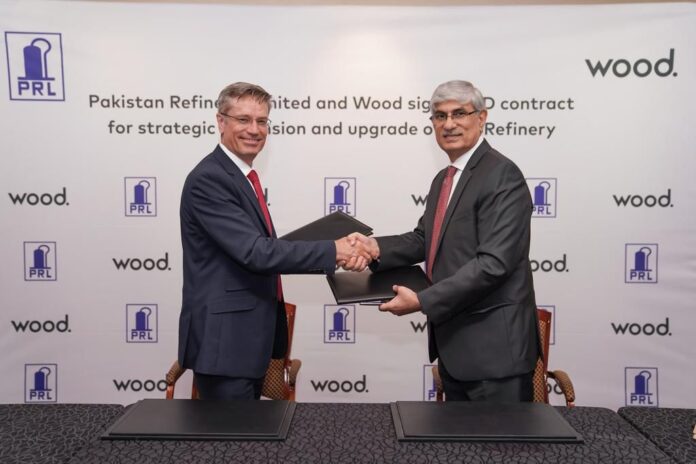 As per details, PRL, without any government support or incentive and also in the absence of new refinery policy has signed the deal with the Wood Group UK Limited (Wood) in Dubai on May 19, 2022 appointing them as the Front End Engineering Design (FEED) contractor for the Refinery Expansion and Upgrade Project (REUP).

This much-needed contract was signed by Zahid Mir, Chief Executive Officer/Managing Director of PRL and Daniel Jennings, Head of Commercial, UK Projects of Wood. The signing ceremony was attended by Syed M. Taha, MD & CEO of Pakistan State Oil (PSO) and a member of PRL Board of Directors while certain other board members and the leadership team of PRL, and senior representatives of Wood were in attendance.

This project (REUP) entails upgrading the existing refinery from hydro skimming to deep conversion which will significantly reduce production of High Sulphur Furnace Oil (HSFO) and will maximize production of environment friendly EURO V standard premium products such as High-Speed Diesel (HSD) and Motor Spirit (MS) while this project will also double the crude processing capacity from 50,000 barrels per day to 100,000 barrels per day. The upgraded complex will also produce propylene which is a valuable feed stock for petrochemicals. Project cost, currently estimated at approximate $1,200 million, will be finalised at the completion of FEED followed by award of engineering procurement & construction (EPC) contract.

It is relevant to note that none of the country’s refineries has so far initiated such a wonderful up-gradation project as all are waiting for incentives to be announced through the much-awaited new refinery policy.

According to sources in the oil refining sector, total duration of REUP is five years with FEED with feed period of 18 months. They said that PRL must be appreciated for taking initiative proactively without waiting for government support or incentives. They said PRL by initiating the REUP will be able to reduce import bill and it is estimated that around 500 million dollars will be saved if count the current prices of crude, HSD and petrol in the international oil market. But, it can be reduced if the prices of HSD and petrol decrease in the global oil market, said sources.

In a letter dated May 20, 2022 to the General Manager, Pakistan Stock Exchange Limited, the PRL has informed about the signing of agreement with Wood Group UK Limited appointing them as the Front End Engineering Design (FEED) contractor for the Refinery Expansion and Upgrade Project (REUP). The PRL further told that this project will increase the crude processing capacity from 50,000 barrels per day to 100,000 barrels per day, significantly reduce High Sulphur Furnace Oil HSFO) to less than five percent and maximise premium products such as High Speed Diesel (HSD) and Motor Spirit (MS/Petrol) meeting the EURO V specification.