Some banks are just government lending arms, especially now that the government can’t borrow from the Central Bank 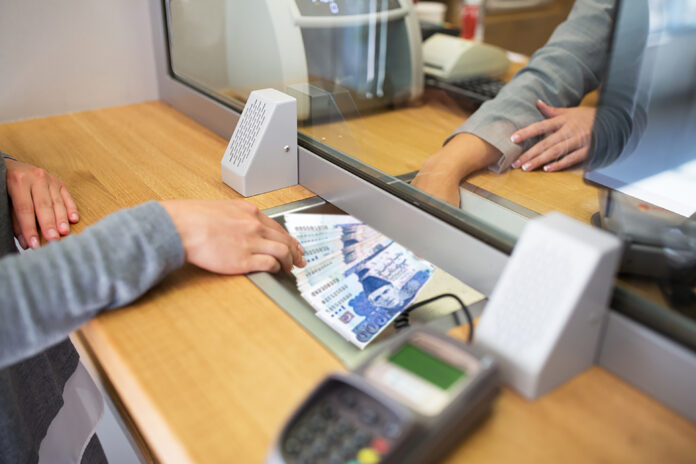 A bank is defined as a financial institution licensed to receive deposits and make loans. Banks can also provide other financial services such as wealth management, currency exchange, and locker storage.

While there are different banks such as retail banks, commercial banks, corporate banks, and investment banks, they can also be classified as conventional and Islamic banks. Some are private sector banks and some are owned by the government. The central bank is the banks’ bank and regulates the sector. These are some common features of banks across the world.

Banks, however, operate to earn profit for shareholders. They do this by charging interest on loans and other debt they provide to borrowers. 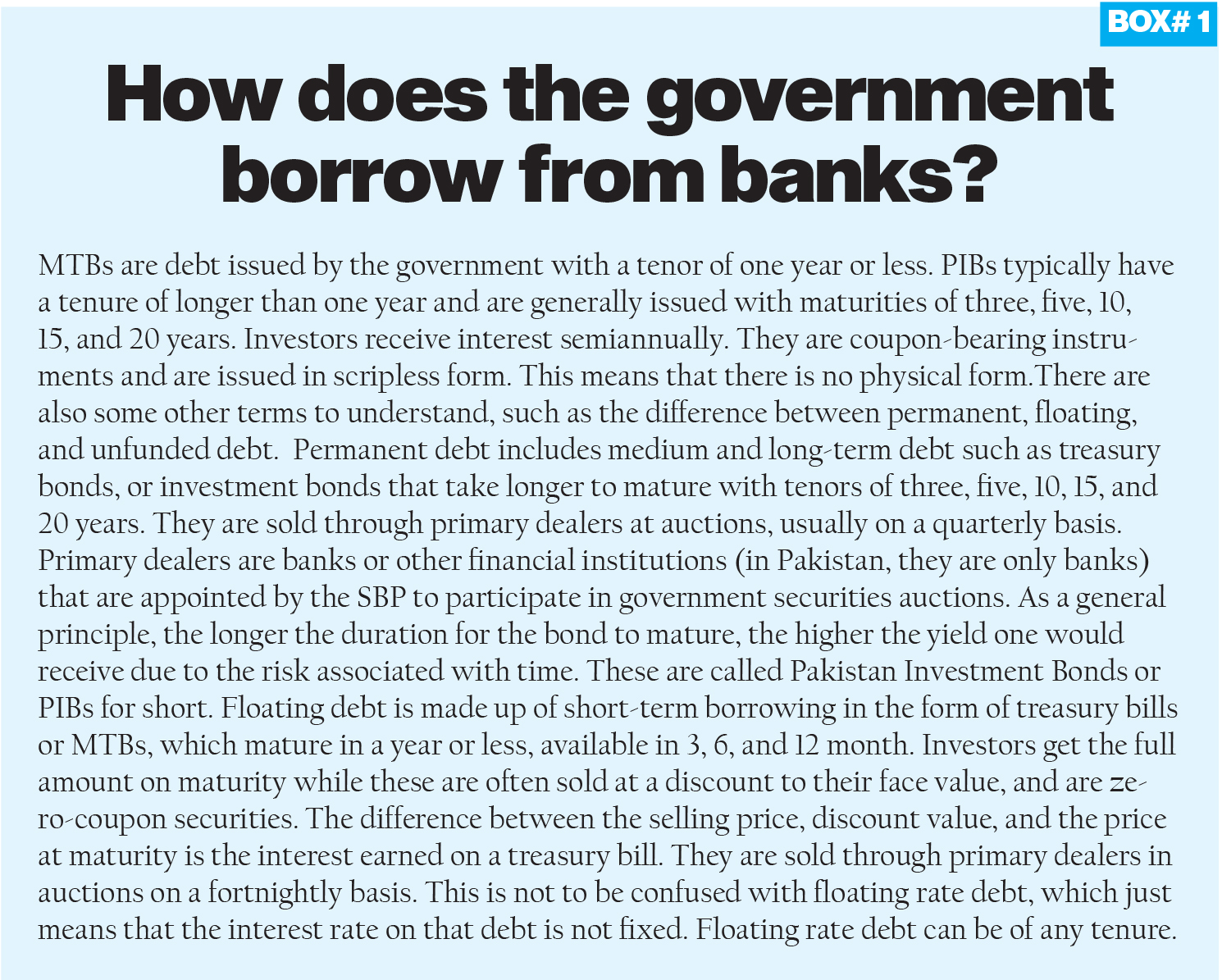 Investment in government securities supports the liquidity position of banks. It also augments their earnings. However, this exposes banks to risks associated with interest rate changes.

Some banks slowly cut down on banking 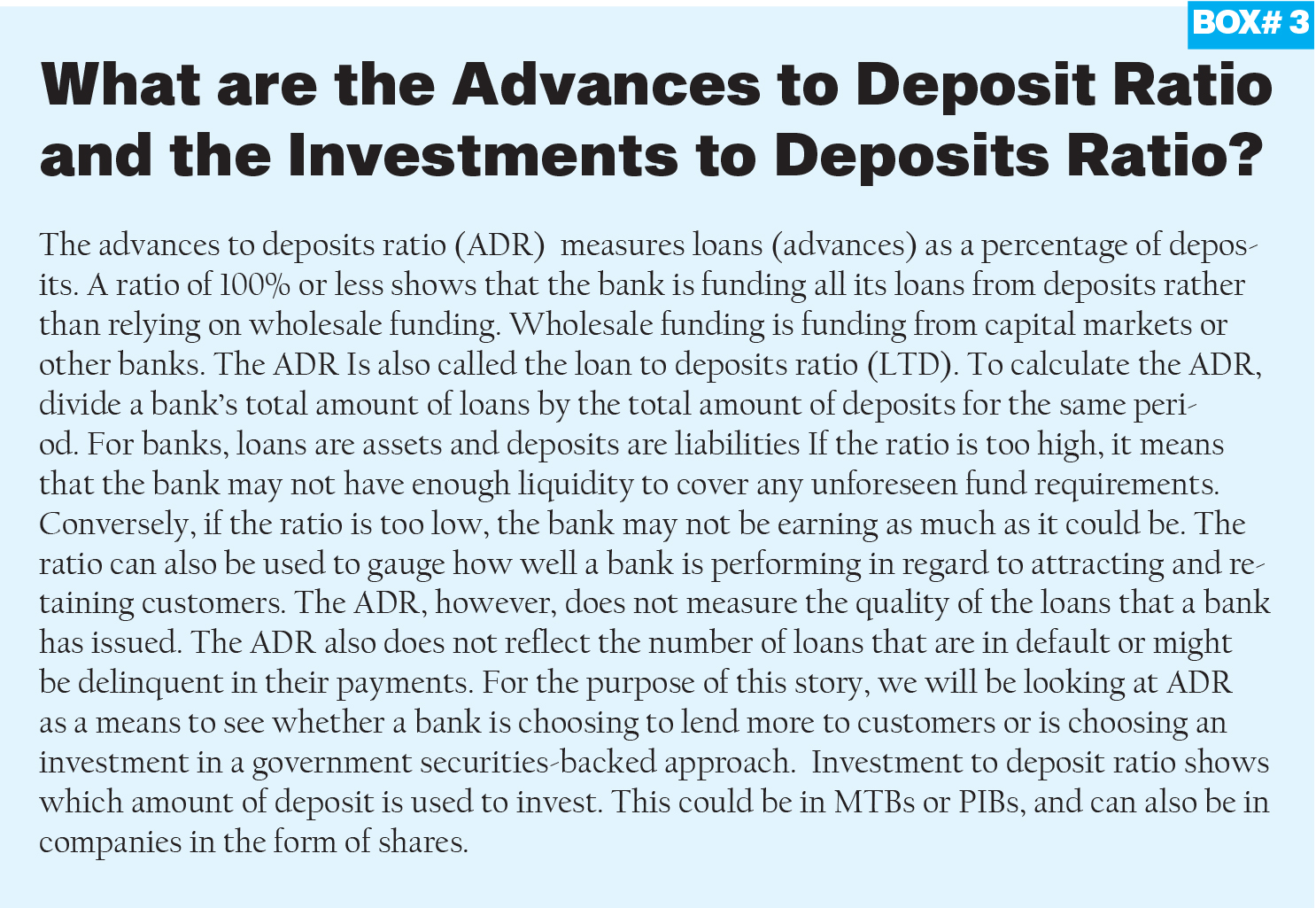 The limitations of this exercise, however, are such that banks such as FABL which show a 14% decline in ADR ratio sported a high ratio in 2021 of 79% and cut down to 65% which is still higher than the sector average. That is why a table with the ratios has been attached for better comparison.

Another ratio we are choosing to look at is the IDR. This shows how banks have increased their investments in government securities primarily.

“IDR is a bit deceptive because banks also invest in government securities by borrowing from SBP,” says Fahad Rauf, Head of Research at Ismail Iqbal Securities.

This means banks borrow to make investments and use means beyond their deposits, such as Open Market Operations (OMOs).

This analysis was interesting as it showed that nearly all banks that we looked at had increased their exposure to investments. Samba Bank, Askari Bank, Soneri Bank, National Bank of Pakistan, UBL, Bank Alfalah, Allied Bank, Standard Chartered, Faysal Bank, Habib Metro Bank, Bank of Khyber, and Bank of Punjab increased their IDR over the span of 2012 and 2021. Bank Al Habib, MCB, HBL, JS Bank, and Meezan Bank decreased.

Again, it is important to look at details such as Standard Chartered Bank has increased its IDR to 119%, meaning it is borrowing to meet its investment needs more than its counterparts.

Also, while the Bank of Khyber is showing a meager 7% increase in the IDR, it is important to note that it has pulled up its IDR to 83% in 2021.

On a sectoral basis, the IDR has increased from 51% in 2012 to 70% in 2021. This shows the move in bank interest towards government securities. While IDRs have increased, the ADR has remained largely flat.

Pakistani banks are often called rent seekers because they focus more on income through investment in government securities than to lend to consumers. This is because lending to consumers comes with a risk, regardless of how big or small they are.

Investing in government security is risk-free. You will always get your money bank and an interest income with it. The decision of rates and tenors, however, decides whether the investment is fruitful or not. See box 2. 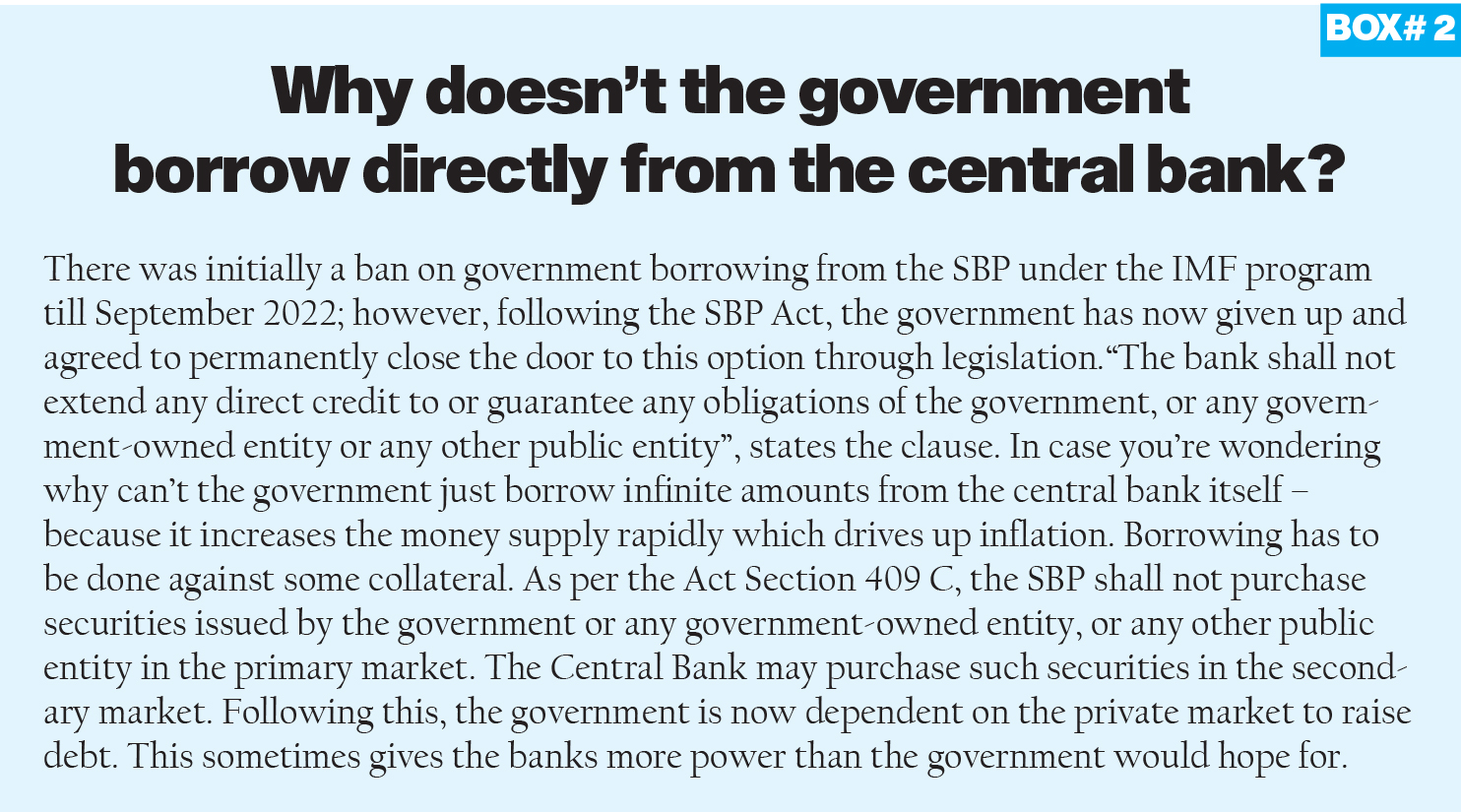 “It’s clear that banks have a concerted focus towards mobilizing deposits towards risk-free instruments. And from their perspective, why not?” says Faizan Kamran Khan, CEO of FRIM Ventures.

“This change primarily came about post the financial crisis of 08-09. ADR levels used to be north of 70%. In came the crisis and banks saw a dramatic increase in NPLs and infection ratios,” he adds.

Rauf explains that prior to the global financial crisis (GFC), during Musharraf’s government, Pakistan received large foreign inflows in the form of foreign direct investment (FDI) and aid. “Back then the government did not need to borrow desperately from banks. As a result, banks chose the lending path.”

“Post the GFC our economy derailed and has not improved much. The large fiscal deficits, lack of consistent FDI, and rising debt levels have limited our financing options. Hence we are more dependent on local banks to fund the fiscal deficit.”

Khan also explains that since the crisis, most banks have reduced their focus on loans and concentrated on investments. “And why not? The government has been the largest borrower and offers risk-free lucrative spreads.”

Rauf however highlights the need to consider the customer basket while talking about lending. “There are very limited corporates or groups that meet the criteria for lending. A large part of our economy is informal. Currency in circulation has been increasing continuously and there is no proper documentation in most cases,” he adds.

Another key factor pushing banks away from lending are hurdles they face with recovery. “It is important to consider our foreclosure process. Banks have a lot of collateral but are not able to sell them due to legal implications,” says Rauf.

What does the SBP think about concentration in government securities?

In its financial stability review 2020, the SBP analysed the impact of investments in government securities on banks’ earnings. It came to the conclusion that the government’s reliance on the banking sector has steadily increased for fiscal needs. As a result, it has influenced the balance sheet structure of the banking sector.

The review points out that the high concentration of assets in government securities provides necessary support to banks’ earnings against business cycles particularly in downturn times. 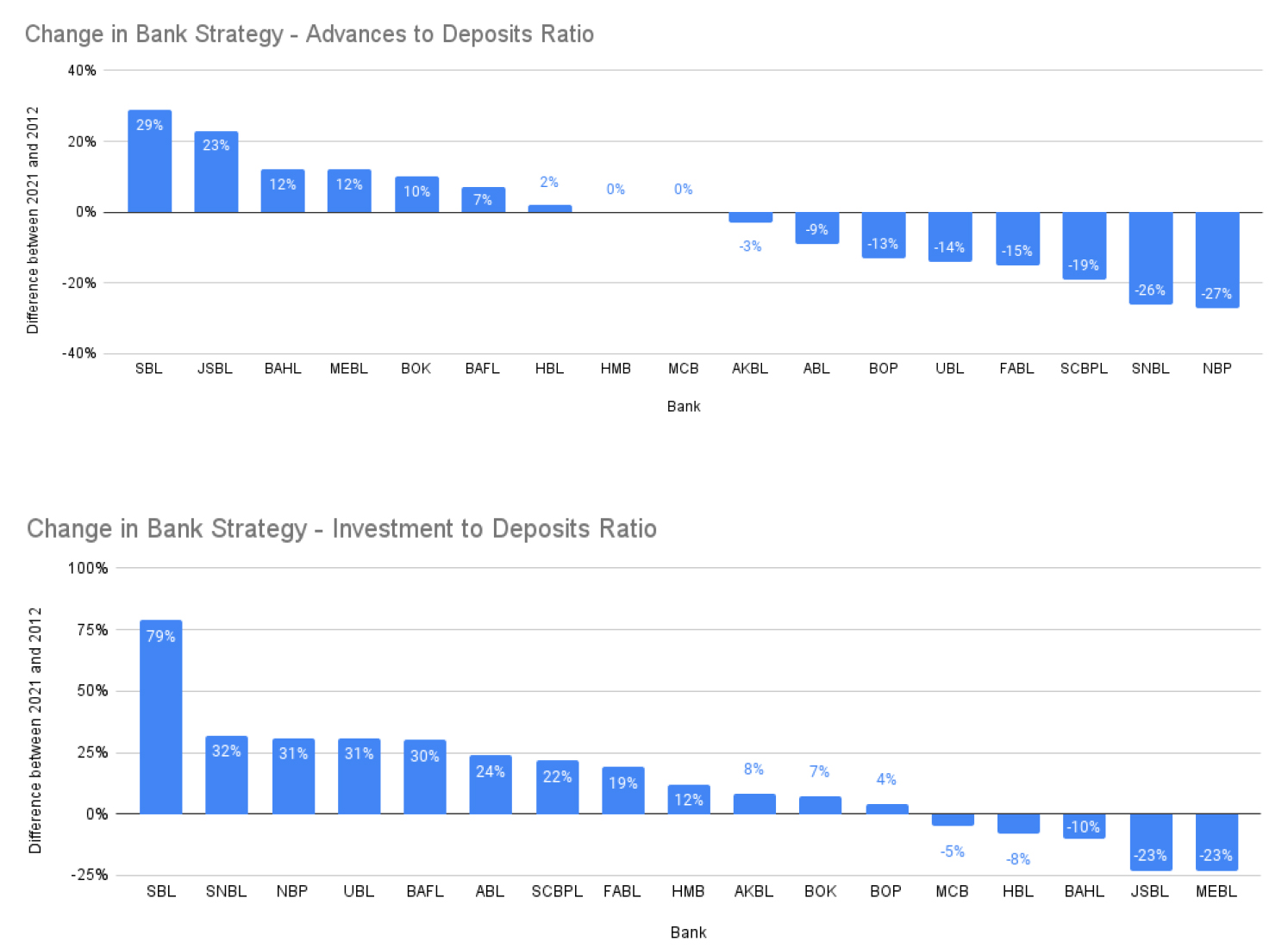 The SBP, however, also finds a flaw in this arrangement. The report adds that the persistence of fiscal deficits and high demand for bank credit might have affected the risk appetite of banks. This behaviour has weakened the true economic role of financial intermediation that banks are supposed to perform.

“This bears far-reaching repercussions for the future economic growth of the country,” read the review.

The SBP called the maintained solvency backed by higher exposure in risk-free securities a low risk-taking move on the part of banks. And says this is an inefficient allocation of the capital banks have.

The SBP however stated that banks need to “strike a balance between financial stability and due risk-taking”. The central bank deems it essential for effective financial intermediation between general savers and private sector enterprises.

The SBP called for banks to enhance their role in the provision of credit to the private sector, especially to private enterprises and high-potential sectors such as SMEs, Agriculture, and Mortgage Finance.

While the SBP regulates banks, it also pointed out that the reason banks choose to go down this path is that there is a demand from the government. The review says that the government needs to broaden its revenue base and look for alternate sources of funding for its fiscal needs to reduce reliance on the banking sector.

This essentially will address the public sector crowding out that borrowers face when applying for bank credit or loans.

The review concluded by stating that collaboration between policymakers and market participants is essential to promote savings in the economy and develop a vibrant capital market for effective intermediation.

Crowding out the people that need loans the most

Why lend to private participants when you have the government, and if you do lend to private businesses, why not make the most of it by lending to blue chips? After all, why not? What is safer than betting on the government – especially in times of crisis? Is this where the government stands up and presents itself as a guarantee and merely uses commercial and Islamic banks as an intermediary vehicle to loan out to the small guys? 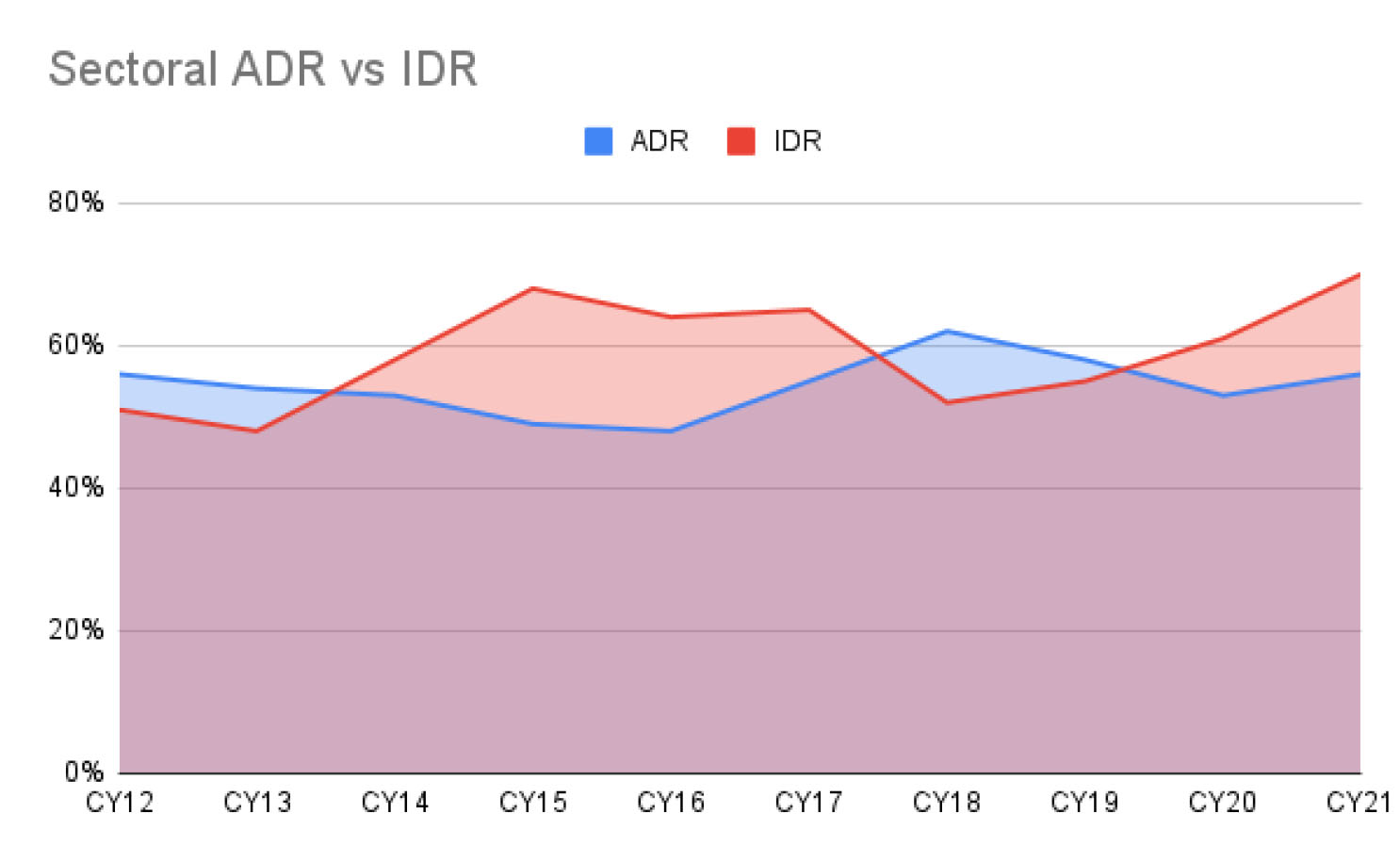 In the end, one has to question who is looking out for the little guy. What about the real economy? When will the SMEs be able to walk into a bank and get a loan? The answer is simple, when banks stop acting as a government lending arm and start to behave like banks.