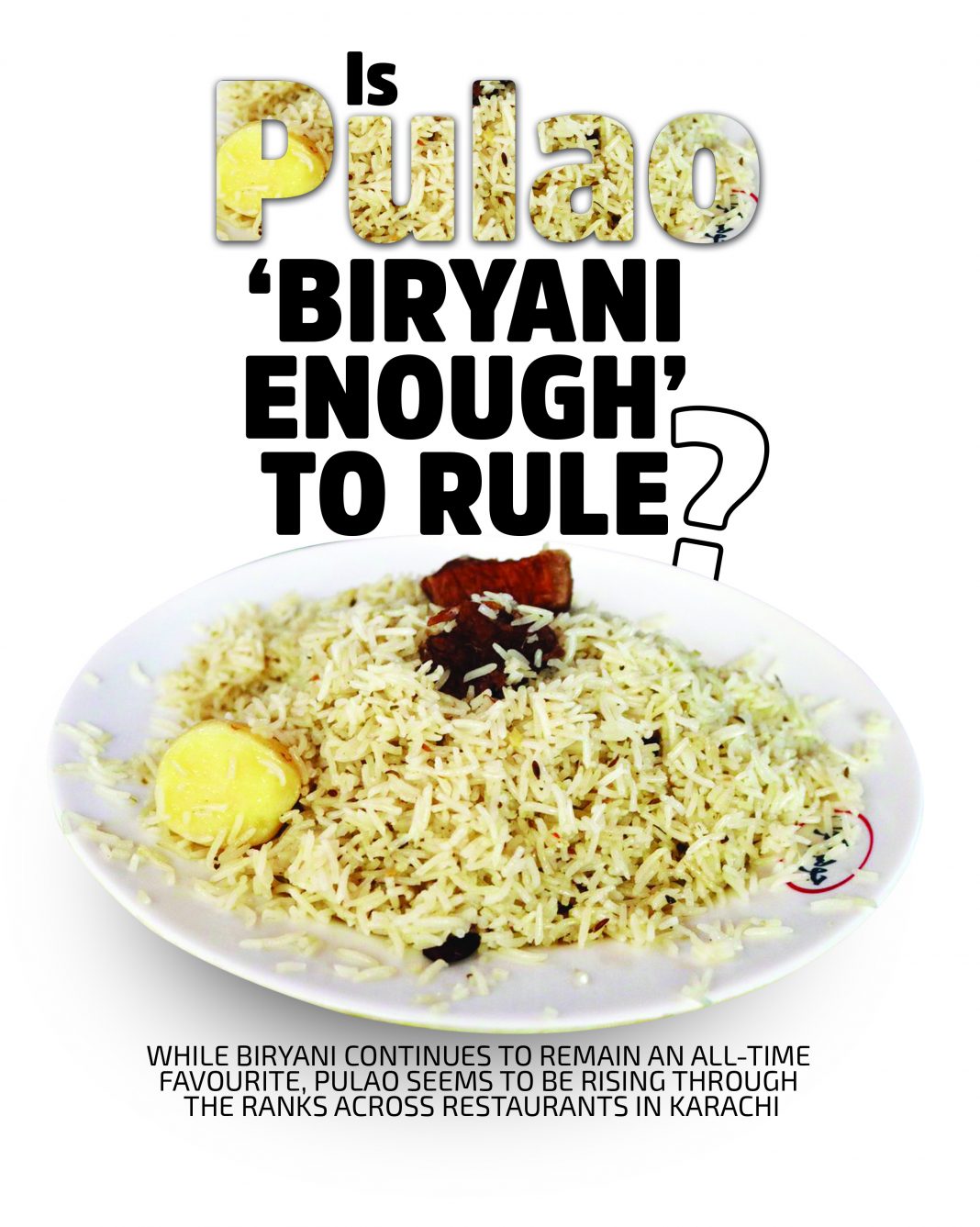 There has been little to no doubt that Biryani has ruled the hearts (and definitely, the stomachs) of people for ages in this part of the world. But recently, a number of food joints, both old and new, have started offering space to another major contender in the rice and meat dishes genre, spicing up the battle which has to date been dominated by Biryani.

Yakhni Pulao, it seems, has arrived. And in a sign that demand for it is picking up in Karachi, restaurants dealing exclusively in Pulao have opened up in various areas of the city. Even old food businesses have added Pulao to their menu to cater to the growing demand, resulting in a possible new competitor for Biryani – the most sought-after local cuisine.

Aromatic spices sizzled in clarified butter alongside thinly sliced onions, with basmati rice and meat cooked in the latter’s broth, and garnished with coriander and mint leaves to give your palate a mouthful of goodness is what Muhammad Arif Khan is offering at Koyla Yakhni Pulao, a 17-year-old venture, which recently opened its second outlet in DHA Phase 2 Extension.

Khan, who had migrated with his family from India in 1947, had managed to bring with him, besides few of his belongings, a treasured family recipe of Pulao. After working for 27 years in the Income Tax Department, Khan finally decided to call it quits during the 1990s, in order to start something that he held close to his heart – a food venture.

Over the past few years, Pulao specialist restaurants have started to grow in a city where previously ‘Biryani’ – layered rice and meat dish – was the undisputed king among masses

Since he didn’t have a deep pocket and a huge investment to start his business, Khan managed to arrange only a barrow at Baloch Colony and began selling his family’s much loved rice dish, Pulao. “I didn’t have anything to start with, but my passion for food made it possible.” The owner of one shop and partner in the other, Khan tells his journey with a glee. Today the seventy-year-old runs two shops with the name of Koyla Yakhni Pulao, one in Gulshan that he started in 1999 and the other in DHA where he partnered with a friend in order to expand his food chain.

“It was not easy to explain people the dish. They only knew about Biryani,” explains Khan citing it as one of his biggest struggles at the start of the business. “They thought it lacked flavor,” he recalls.

However, over the past few years, Pulao specialist restaurants have started to grow in a city where previously ‘Biryani’ – layered rice and meat dish – was the undisputed king among masses. Khan calls himself pioneer of what has become Karachi’s recent food interest.

From Riwayat restaurant in Korangi to Standard Pulao in Landhi, to Koyla Yakhni Pulao in Defence and Gulshan, and Al-Asif Pulao on Super Highway, Karachi has recently witnessed a boom in restaurants that specialize in Pulao, selling it with different meat choices ranging from mutton, beef and chicken.

Khan, who initially sold a few plates a day, is now able to sell up to 20 kg of chicken Pulao, 10 kg of mutton Pulao and some 15 kg of beef Pulao every day due to increased interest of customers. And this consumption is just at his Defence branch. A plate of chicken Pulao, which is around half a kg, costs Rs 200. Beef Pulao costs Rs 300 while for mutton the prices go up to Rs 400. Do a little math and it appears that Khan manages to make daily sales worth Rs 8, 000 for chicken and mutton Pulao each, while Rs, 9000 for beef Pulao in just one of his two outlets in the city. That’s around Rs 25, 000.

“Over the years people have developed a taste for Pulao as well. They like something different now and we’re able to provide it,” says Khan explaining the recent rise in Pulao in a city where Biryani has been, and still is, an all-time favourite.

For a long time, only Biryani specialized restaurants existed and even today Biryani tops the chart for being the highest ordered food item on EatOye – Pakistan’s largest online food- ordering portal.

“It will take a lot of time for Pulao to take over Biryani. It has its own market and it’s not going anywhere anytime soon” Iftekhar Siddiqui, owner of Riwayat Pulao

“Yes, we like Biryani too, but Pulao is a little different and somewhat subtle in taste,” shares Mohib Ali, a customer at Koyla Yakhni Pulao. “When you don’t want to have a spoonful of spicy Biryani, Pulao is a better option.”

Iftekhar Siddiqui, owner of Riwayat Pulao in Korangi, has a realistic take on the recent phenomenon, and understands the dynamics of the trade well. “It will take a lot of time for Pulao to take over Biryani. It has its own market and it’s not going anywhere anytime soon,” he says. Although the restaurant owner knows Biryani’s strength, he himself markets Pulao on the restaurant’s signboard, believing that with time the dish has the potential to become the city’s favorite.

While Biryani is a spicy love affair that Karachiites can’t seem to fall out of, the presence of numerous customers outside Pulao restaurants signifies that the City of Lights may well be embracing the Persian dish with open arms.