Work on hydroelectric power projects on steady road to completion 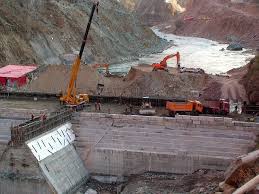 The Prime Minister had stressed upon the newly appointed Chairman WAPDA to expedite the crucial hydropower projects completion, meeting the deadlines set for their completion.

The project’s dry test is scheduled for December 2017 while the wet test will be undertaken by February 1 next year.The second unit of Neelum Jhelum will be operational by March 15, 2018 while the 3rd and 4th units by April 15.

The Chairman further highlighted that work was underway on Kachhi Canal Project which comprises of the main canal and distribution system.The project will provide irrigation facilities to an area of 72,000 acres in Dera Bugti region, after its completion in August this year.

A total of 9,917 acres of land acquisition will be completed by May 2017 for the 2,160 MW Dasu hydro power project.The  work on Dasu project will be inaugurated by the Prime Minister in June 2017 and the project is expected to be completed at a  cost of US$ 4,300 million.

The Golen Gol hydro project will produce electricity three times more than the requirements of Chitral.