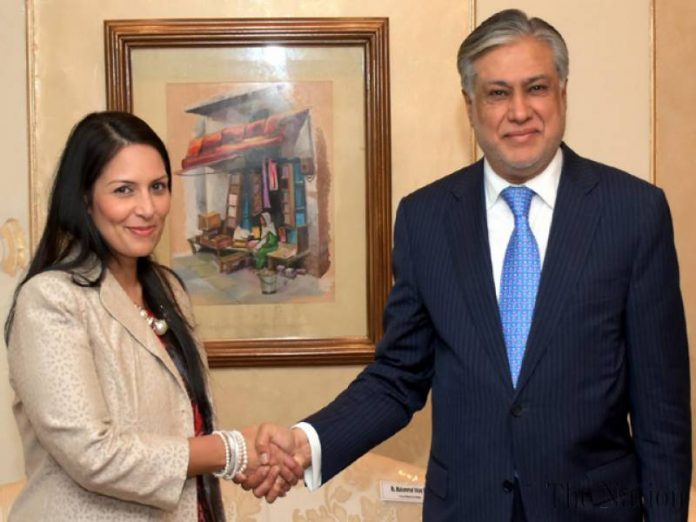 Finance Minister Ishaq Dar has called upon Priti Patel MP, Secretary of State for International Development, UK, along with members of her delegation on Thursday at Punjab House, Islamabad.

Ms Patel complimented the Finance Minister on the successful completion of the IMF program. She said that the successful implementation of tax reforms, while conducting fiscal consolidation, was a remarkable achievement.

She said DFID’s program in Pakistan is its largest globally. She said there were huge opportunities for collaboration in the future in economic development and education, and also in the fields of social security and health. Ms. Patel said that the partnership with Pakistan is incredibly strong and that we need to work together to further evolve and develop the relationship.

Ms. Patel said that both Pakistan and UK must explore new and more diverse ways of forming connections, including through financial markets and stock exchanges. She said that dialogue can be held on exploring bilateral opportunities regarding market access, foreign direct investment, and other opportunities that the financial markets of UK have to offer. Talking about the post-Brexit era, Ms. Patel said it is even more important now for the UK to enhance opportunities for trade and economic development, and to develop new partnerships and strengthen existing ones.

The Finance Minister highlighted that after having achieved macroeconomic stability, the government is now focused on attaining higher, sustainable and inclusive growth. He acknowledged the valuable support of DFID and said that the UK and DFID are true partners of Pakistan. He said that the government has submitted the letter of intent for joining the Open Government Partnership, after having become a signatory to the OECD Convention on Mutual Administrative Assistance in Tax matters. He expressed the hope that the new Development Partnership Agreement between the Government of Pakistan and DFID will be signed soon. The Finance Minister apprised the visiting dignitary about the merger of the Pakistan Stock Exchange and the strong performance of the Exchange over the last year or so.

Ms. Patel expressed her condolences over the recent spate of terrorist incidents in different parts of the country. The Finance Minister appreciated her thoughtful sentiments and said that the government is determined to undertake all necessary measures to eliminate the menace of terrorism from the country.