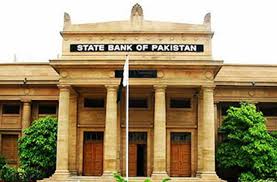 The State Bank of Pakistan (SBP), in its 4th quarter performance Review (QPR) of the Banking Sector ended 31st December 2016, said the deposit growth has remained on a steady path while 4th quarter’s profit has improved over last years’, though entire year’s profit slightly narrowed owing to low-interest rate environment.

During the period, the impressive growth in advances to private sector was recorded highest in the last 10 years. The solvency profile of the banking sector remains robust as Capital Adequacy Ratio (CAR) of 16.17 per cent is well above the minimum required level of 10.65 per cent, SBP said.

The report highlights that the asset base of the banking sector has expanded by 4.6 per cent in during 4th quarter 2016. The key contribution has come from demand for credit from private sector, thanks to lag impact of monetary easing, better economic conditions, and improved liquidity.

Positively, a bounce back in the advances flow has been observed in the textile sector, the largest borrower of the banking sector. Besides; sugar, energy, agribusiness, and cement are some other sectors which have availed major financing from the banking sector in 4th quarter 2016. Banks’ investments, however, have fallen by 1.5 per cent during 4th quarter 2016 mainly on account of decline in investments in government securities.

Deposits:  The addition in the overall deposits has been contributed by non-remunerative current deposits followed by fixed deposits and saving deposits. The report highlights that the high deposit growth in the 4th quarter as well in the entire year is a welcome sign considering deceleration in deposit growth observed in the last couple of years.

The asset quality of the banking sector has improved with a decline in non-performing loans (NPLs) and corresponding ratios. Particularly, NPLs to loans ratio receded to 10.1 per cent, the lowest level in eight years. Importantly, besides pick up in advances, recoveries in NPLs have played a pivotal role in bringing the ratio down. The coverage ratio (provisions to NPLs), has jumped up to 85.0 per cent in Q4CY16 (82.7 per cent in Q3CY16).

The dip in interest margins and reduced quantum of investment has narrowed the Year-to-Date profitability of the banking sector. As a result, return on assets (ROA) has declined to 2.1 per cent as compared to 2.5 per cent in Q4CY15. However, strong solvency remains intact as CAR of 16.17 per cent as of December 31, 2016, is well above the minimum required level of 10.65 per cent.