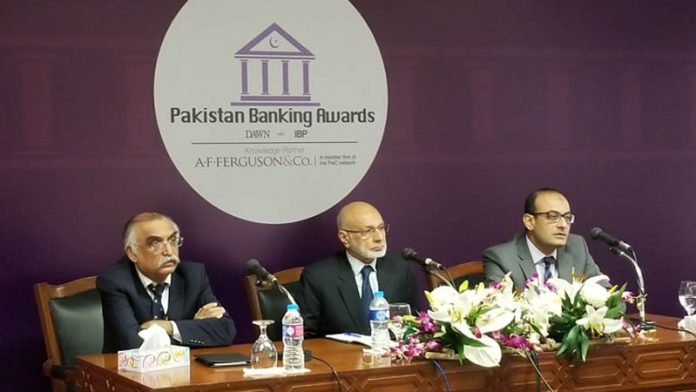 The second Pakistan Banking Awards (PBA) remained a muted affair, as the organisers – the Institute of Bankers, A.F. Ferguson and Company and Dawn Media Group – were singularly unable to give it the kind of hype that such an event deserved.

Compared to the last year’s inaugural edition, this year’s ceremony was low-key and subdued, with not a single promotional endeavour being made in terms of marketing and advertising etc. and largely owing to this lethargic indifference of the organisers, the event failed to create any buzz in the print and electronic media.

It is pertinent to mention that Bank Alfalah also bagged the award in the category of Best Bank for Customer Franchise, which was bestowed on account of its expanding Islamic banking section and increasing public awareness.

Telenor Microfinance Bank (TMB) walked away with two awards. First, as the Best Bank in the unbanked category – for improving and expanding its financial inclusion via outreach in rural and low-income areas among all types of account holders. Second, TMB, was also declared the best bank in the category of microfinance banking, for raising its outreach and penetration in the low-income segment throughout Pakistan.

UBL was declared the best bank in the category of Corporate Finance and Capital Market Development for capital market development and providing advisory services for optimal usage of industrial and commercial assets.

In the category of Best Environmental, Social and Governance (ESG) Bank Award, the award went to JS Bank for conducting its operations responsibly.

Meezan Bank was declared as the best Islamic bank franchise.

Habib Bank was awarded as the best bank in the category of Small Business and Agriculture for its outstanding performance and agriculture lending throughout Pakistan.

Though it was scheduled for September, and eventually held in the third week of the month, in this day and age when digital, print and electronic mediums are freely available, astonishingly, no updates about when this event of national importance was to be held, were made public. As a consequence, it was only sporadically covered.

The only saving grace for this year’s ceremony was that several industry officials, including governor State Bank of Pakistan Tariq Bajwa, attended it.

In contrast, the first Banking awards in 2016 had been held with great pomp – raising questions as to what may have transpired behind the scenes to make it as insipid as it was.

Last year, the ceremony had been attended by sponsors, including the Dawn CEO, Hameed Haroon and its Chairperson Amber Haroon Saigal. On the contrary, the awards this year were distributed by Dawn Media Group’s, head of marketing.

In another twist, conspicuous by his absence was Bank Alfalah president Nauman Ansari. The Bank was represented by its Chief Risk Officer, Suhail Yaqoob Khan.

Another point sticking out like a sore thumb is that apparently, PBA seemed to be lacking specific criteria for selection of banks for awards. With no criteria shared with public and media, is it that any bank can land awards for best-this and best-that without appropriate analysis, one asks.

“The banking sector in Pakistan has played a pivotal role in determining the overall economic growth and development and is constantly engaged in creating new opportunities while becoming one of the most sought-after careers in Pakistan,” said State Bank of Pakistan (SBP) Governor Tariq Bajwa.

While addressing the PBA, the governor SBP urged banks to focus on agricultural and SMEs financing to for the long-term and for higher economic growth.

He further said the State Bank has set a target for this year of Rs 1.001 trillion in agricultural lending to support agriculture, which is one of the largest sectors of the economy. The agricultural sector “contributes some 27 per cent in GDP growth, however, bank’s lending to this sector is about 4.5 per cent,” he said.

He said that after a long gap the country’s economy is on the right path, adding that last year Pakistan achieved 5.3 per cent growth and this year the growth will be an estimated 6 per cent. Previously, economic growth was lower than inflation, however now the growth is higher than inflation, he added.

The governor said that the financial sector, particularly the banking sector, plays a pivotal role in determining the overall economic growth and development of the nation. The efforts and achievements of the institutions contributing to this sector in Pakistan should be recognised and acknowledged, he added.

“Banking industry is playing an instrumental role when it comes to inclusion- approximately 800 new branches are opened every year in urban and rural areas; products like SMS banking, mobile banking, internet banking are playing a critical role to make inclusion possible,” Bajwa said.

Appreciating the event he added, “I commend and appreciate the time and efforts of these organisers and congratulate them for their collaboration to ensure that these Awards become a success at all levels.”