For so many, dead signals mean no work 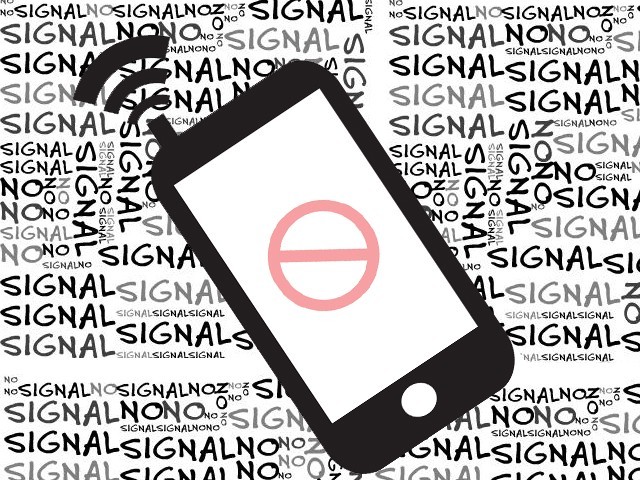 On September 29, Muhammad Faisal, a full-time Uber driver in Karachi, as usual left home early, at six in the morning. Having cashed-in on a couple of rides almost immediately, Faisal anticipated totting up the 12-rides-per-day average, to qualify for the 35-rides-in-four-days bonus – an incentive Faisal is keen on achieving week after week.

A little after 8 a.m., Faisal was signalled for another ride near Mohatta Palace and he was on the way to pick it up. A total of four rides in the first three hours, it was going to be a good day, so thought Faisal. The next moment when he picked up his cell phone to chart his path through Google maps, the app was dead, said Faisal, talking to Profit.

“After restarting the application, and going through everything else that one could possibly do to revive it, I noticed the absence of signals – which meant no internet and no access to Uber app or Google maps,” said Faisal. So, even if he somehow reached the pickup point, there was no way of contacting his customer or continuing the ride. Disappointed in the extreme, he called it a day knowing that his take has been setback quite substantively.

Desperate to avert any untoward incident at the business end of the Ashura (8th, 9th and 10th of Moharram – Sept. 29, 30 and Oct 1) all provincial governments resorted to the easy option to ensure safety: get all wireless GSM cellular services, including internet, suspended.

Though people were able to use cable internet services at home, the wireless network was completely jammed thus bringing day to day activities of the populace at halt.

The Sindh government notification announced: mobile phone and internet services were to be suspended over three days from 08:00 to 20:00 hours in at least eight cities of Sindh – Karachi, Hyderabad, Shaheed Benazirabad, Khairpur, Sukkur, Larkana, Shikarpur and Jacobabad.

For some reason the suspension for the 8th of Moharram (Sept. 29) was not announced beforehand, catching people like Faisal unaware and unprepared for the sudden communication blockage.

For Faisal, the next two days were similarly agonising. “I virtually had no work, while others who somehow managed to get some rides, with the app nonfunctional, those were neither initiated nor ended the normal way, with fare calculated randomly on a whim”, said Faisal.

“I believe the importance of information and communication technologies in the lives of people is still not comprehended by the policymakers. The discomfiture the absence of signals and the internet access causes is enormous to ordinary people as well as those dependent on it for their work every moment of the day and night.

“If they somehow could appreciate that, they would not be blocking access whenever a security threat presents itself”, said Usama Khilji, a human rights activist, on the matter.

“This is a denial of the fundamental right to information under Article 19-A and impacts freedom of speech guaranteed under Article 19 of the Constitution,” added Khilji.

According to technology experts, with cameras already there, mobile jammers can be planted on the procession routes and safety of the mourners, or in case of a cricket match the security of the audiences can be ensured without stopping the whole city in its tracks, with the attendant socio-economic issues. The losses that accrue to people and businesses cut a wide swathe: the mobile service providers, common citizens, cargo transporters, car tracking companies, ride-hailing services, home delivery suppliers in a range of trades – not to mention general users of the technology, which basically means everyone.

Several leading mobile service providers were separately contacted in order to quantify their losses, but none of these had yet finalized the impact of the losses suffered over the three-day hiatus this year. According to market analysts, approximately Rs. 1 billion were lost by the four leading cellular companies: Jazz-Warid, Ufone, Telenor and Zong.

To put things into perspective; Pakistan Telecommunication Authority (PTA) announced the annual income of cellular companies was Rs. 345.537 billion in 2015-16. During the last 15 months since then, the mobile users seem to have increased exponentially, thus adding immensely to the revenue/loss dimension on cellular suspension.

Additional to the billions of rupees lost by large companies, small scale entrepreneurs, internet based service providers and hundreds of Uber and Careem drivers also had to go through the agony as a consequence of the three-day-long shutdown.

Though no data on accumulative losses to the country is available, rough estimates can be made based on the individual losses that were reported.

Talking to Profit, a Sindh government official said: “All big cities of the province faced terror threat, leaving the government with no other option except shutting down mobile services during Ashura.”

PPP, the ruling party in Sindh, was actually the first one to introduce this practice of cellular networks blockage in their tenure from 2008-2013 under the federal interior minister Rehman Malik. To this day, Malik pats himself on the back for introducing mobile service suspension to combat threats to security.

No wonder, one could not expect the present government to deviate from the trodden path and find a more imaginative solution to the issue.

The point to ponder

Despite the cellular networks suspended at the slightest pretext, year 2014 saw the highest number of terrorist-related fatalities – 5,496 compared to 5,379 in 2013 (according to the South Asia Terrorism Portal). This clearly manifests that it takes more than cellular suspension to stop the terrorists from striking.

However, with the initiative of Zarb e Azb – launched after the deadly Army Public School attack in Peshawar – a significant decrease in the sheer number of terrorist activities was witnessed in 2015 and 2016, with 3,682 and 1,803 deaths respectively.

The sectarian attacks also declined in 2016 with 131 fatalities in 33 incidents against 276 fatalities in 53 incidents in 2015. According to the experts, however, the data does not substantiate that the benefit is coming on the back of cellular services suspension on high-alert days.

“Security forces have not made public any information that demonstrates the utility of signal blockages, simply because it is not possible to demonstrate,” said Khilji.

“Suspending cellular services completely is a bit of a stretch. If the officials cannot come up with a smarter way to counter terrorism, than at the least selective suspension should be implemented in geographic niches with the times carefully calculated,” said Pervaiz Iftikhar, an expert on information technology.

“Why does the government’s technical staff not recommend to fix jammers on the route of mourning processions – where they have already placed cameras. This is easier and can save losses worth billions of rupees to mobile companies and to the government in taxes,” asked Iftikhar.

Khilji also spoke of the social psychological issues faced by the citizens on such days when security is already a concern for everyone. “People are unable to contact their friends or family, and this creates a sense of panic; since it impacts mobility as well, anxiety levels are heightened. Then, if required, people are unable to even contact rescue services.”

Ironically people confronted with terrorism and violence, such as the Bohra community visiting from abroad for the Ashura, and needing to communicate on WhatsApp and on phone and dependent on Uber/Careem and Google Maps to commute were left at the mercy of the rickshaw drivers. Their inability to contact their families abroad owing to the switch-off must have added to the anxiety levels. (This year 27,000 Bohras felt reassured enough about security to come over to Karachi from various parts of the world for the Ashura).

Experts also say that such regular isolation from communication may hurt the country’s digitization prospects at a time when it envisages promoting knowledge-based economy and socio-economic growth. Billions of dollars have been invested on the back of mobile broadband services in Pakistan over the last few years and such disruptions are only going to discourage investors in the future.

During 2015-16, total foreign investment in telecom sector stood at $246 million – around 13 % of the total FDI of $1.9 billion. In the ongoing fiscal in the first two months alone, foreign investment has increased by 155 %, going up to $457 million. However, one should not ignore the rather significant $2 billion the government has made since 2014 from the telecom sector through auction of 3G and 4G spectrum and taxes.

The unhindered and now rather frequent practice of cellular network blockage on the pretext of security is a major bugbear of the industry.

“Last year, Pakistan’s IT exports increased by 19%, touching an unprecedented level of $1 billion, clearly reflecting that the IT industry is so vital to the booming economy. However, for sustained growth, seamless access to Information and communication technologies is essential and such signal blockages are a major hindrance,” Khilji said.