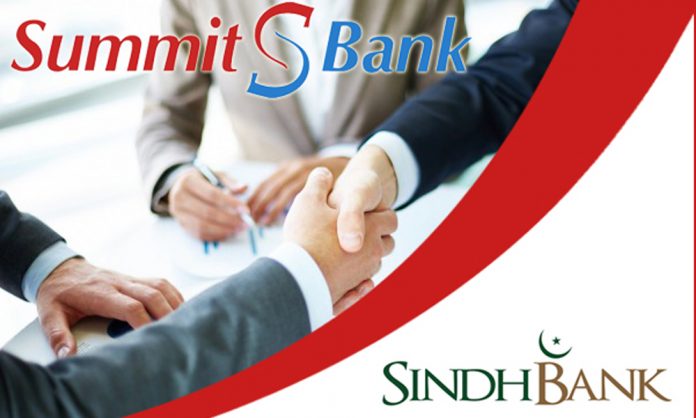 LAHORE: In a notification to the Pakistan Stock Exchange (PSX) on Monday, Summit Bank Limited notified that subject to all applicable approvals and compliances including the approval of the State Bank of Pakistan and the Supreme Court of Pakistan (SC) the Board of Directors in the 89th Meeting of the board have decided to revise the swap ratio from 1:4.17 to 1:8.17 in the proposed amalgamation of Summit Bank in Sindh Bank Limited.

The notice read, “Subject to all applicable regulatory approvals and compliances including the approval of the State Bank of Pakistan and the permission of the Honourable Supreme Court of Pakistan and with the approval of the shareholders of the Bank in a general meeting, the Board of Directors of the Bank has approved and recommended the revision in swap ratio from 1:4.17 to 1:8.37 in respect of the proposed amalgamation of the Bank with and into Sindh Bank Limited.”

The notice further went on to say, “Now thereof, 1 (one) ordinary share of Sindh Bank Limited is proposed to be issued for every 8.37 ordinary shares of the Bank as a consequence of this proposed amalgamation.”

Furthermore, the notification informed that an extraordinary board meeting has been convened on August 31, 2018.

Moreover, in a separate notification, Summit Bank notified that the board has ratified the appointment of Ahsan Raza Durrani as Acting President and Chief Executive Officer / Executive Director of the Bank in place of Muhammad Zahir Esmail who shall be retiring on August 07, 2018.

The notification also noted that Durrani’s appointment is subject to necessary regulatory approvals.

Sindh Bank-Summit Bank merger has come under scrutiny due to alleged financial irregularities and the apex court had already stated the proposed amalgamation of Sindh Bank and Summit Bank would not go ahead without its approval.

Previously, a note from the Supreme Court Registrar office stated Summit Bank was formed via the amalgamation of Atlas Bank, Arif Habib Bank and My Bank and according to regulations of the central bank, it is compulsory for all banks to have a paid-up capital of Rs10 billion.

Meanwhile, the apex court had directed a detailed report to be prepared regarding the merger of these two banks and the progress made in this transaction.

The note added, “Summit Bank has failed to comply with such requirement for years and on the contrary, the capital has been raised fraudulently by misusing depositors’ money against shell companies and fake grower loans through sugar mills and power project in Nooriabad, Sindh.”

Earlier in April 2018, SC had stayed the proposed merger of Sindh Bank and Summit Bank.

A three-member bench, led by Chief Justice of Pakistan (CJP) Mian Saqib Nisar, also issued a notice to SBP governor over the proposed merger, while also seeking the balance sheets of both banks. The chief justice said the banks would not merge without the court’s permission.

The three-judge bench, headed by Chief Justice Mian Saqib Nisar, summoned the CEOs and presidents of the Summit Bank, Sindh Bank and United Bank Limited (UBL) and others mentioned in the FIR registered by the Federal Investigation Agency (FIA) over money laundering charges.

The FIA investigation has also revealed names of the beneficiaries of suspicious transactions, including those of former president Zardari and his sister Faryal Talpur as members of the Zardari Pvt Ltd.

Pakistan Stock Exchange Chairman Hussain Lawai, a close aide of Zardari, and co-accused Taha Raza, the corporate unit head of the Summit Bank, have already been arrested by the Federal Investigation Agency (FIA).

On a request by FIA Director General Bashir Memon, the court ordered the freezing of Rs7 billion deposited by the Summit Bank as its equity in the SBP.

The FIA chief told the court that the inquiry into the suspicious transactions was initiated in 2015 on a source report and, as a result, 29 ‘benami’ accounts were identified.

Of these 16 were in the Summit bank, eight in the Sindh Bank and five in the UBL. Seven individuals were involved in suspicious transactions of Rs35 billion, he added.

Moreover, the FIA has requested the SC to constitute a high-power Joint Investigation Team (JIT) to probe alleged money laundering of Rs35 billion through fake accounts.