Sale of refrigerators, deep freezers up by 15 to 20pc 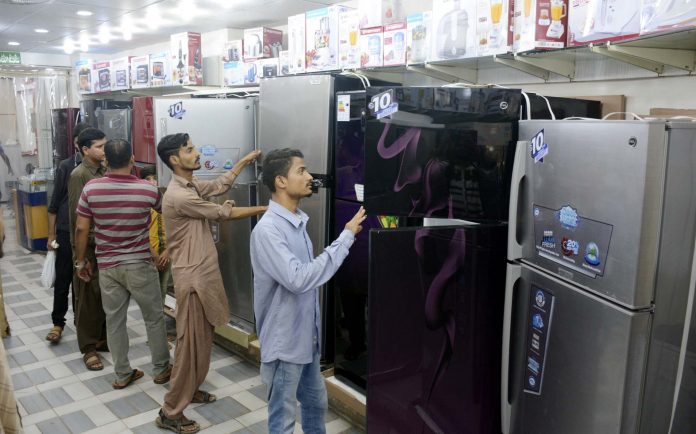 KARACHI: The sale of Refrigerators and Deep Freezers have gone up by approximately 15-20 per cent on the eve of this Eidul Azha as people often replace and buy it to freeze meat of sacrificial animals in their houses. The companies of these products are likely to announce their total sale figures after a few weeks.

Karachi Chamber of Commerce and Industry (KCCI) former vice-president Mohammad Idrees, who is also the leader of electronic market association in Saddar Karachi said, “There is a sharp rise in the sale of refrigerators and deep freezers in the days before Eidul Azha.”

“It would be difficult to say now how many Refrigerators and Deep Freezers were sold at this point in time, but the market dealers say the sale of both products are on the rise for the last two week,” he claimed. People have to usually keep the meat in freezers, ensuring that they store as much of it as possible, he said.

The dealers at different shops said that people are complaining of higher prices from Dawlance, Haier, Orient and Samsung products, which have gone up this year because of the rising import duties in the last six months.

A lot of people purchase refrigerators and deep freezers ahead of this holy festival of sacrifice to preserve the meat of sacrificial animals.

According to refrigerator sellers, the sales profit soared to 20-30 per cent during this month as the companies are giving good margin to the dealers.

On the occasion of Eid-ul-Azha, dealers of different companies are offering cash-backs, discounts and instalment services on various refrigerators. “We provide three, six and 24 months’ instalment facilities to our customers,” said a dealer at an electronic shop of Saddar Karachi.  “We sold 1,000 units of Deep Freezer in the last 20 days,” he said.

The sales growth has been increased by 15-20 per cent of the figures of the same period last year. “Normally, we sell 1800-2,000 units of fridges in a month. This eventually increased to 3,000 units this month,” Noman Ahmed another dealer of a shop claimed.

Talking to Pakistan Today, he said that the sales have so far been good. “We also import branded refrigerators and sell it locally. But owing tohigher regulatory dutiess, it’s difficult for us to compete with local brands,” he added.