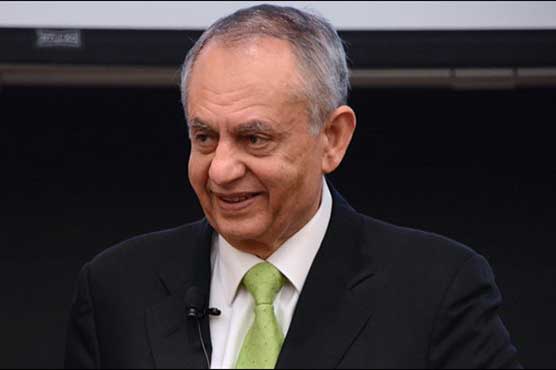 LAHORE: Advisor to Prime Minister on Commerce, Textile, Industry, Production and Investment Abdul Razak Dawood has said that the slogan “Made in Pakistan” will be promoted to the maximum in order to strengthen the manufacturing sector.

Speaking at the Lahore Chamber of Commerce and Industry on Saturday, the PM’s advisor said all efforts would be made to make the slogan a reality, adding that the economy would not be able to achieve high growth rate until and unless the manufacturing sector and exports were strengthened.

He said that payment of refunds to the industries would begin from November this year, as per the commitment of the FBR chairman.

“No country can survive with exports constantly dwindling. Countries like Malaysia, Thailand and Bangladesh are flourishing through their exports. My dream is to get exports back to $25 billion by the year 2019,” the advisor resolved, adding that it was imperative that the culture of export was promoted in the country.

He said the government intended to tighten the screws on imports, as Pakistan was a country that was relying too much on imports.

Dawood said that he was visiting Japan in December with an aim to get duty free access to the Japanese market. He noted that four million youngsters were coming to the job market every year and the only way to provide them employment was to boost manufacturing activities.

The advisor informed that Prime Minister Imran Khan was visiting China on November 2 and a lot of development at the economic front was expected. “I had five meetings with the Chinese ambassador and it is a matter of great satisfaction that they are very conscious about the trade gap between the two countries,” he added.

He said that Kinno production in Pakistan was 360,000 tonnes but its exports were limited due to high ratio of seeds. In order to boost the Kinno exports, he added, the government was contacting China for the production of seedless Kinno in Pakistan.

Speaking on the occasion, LCCI President Almas Hyder said refunds of up to Rs10 million should be released immediately as industrialists were running short of capital while they had to pay utility bills, salaries of staff and other expenses.

“We talk about only five export-oriented sectors despite the fact that engineering and various other sectors have the potential to give a gigantic boost to the country’s exports,” Almas Hyder said, adding that these sectors should also be encouraged through relaxation in duties and taxes.

The LCCI president said that Pakistani products were struggling in the international market as their prices were higher than India and China, while import of finished goods was cheaper than the raw materials.

Hyder said that alternative sources for power generation should be promoted to reduce the burden on conventional sources. He said that agriculture sector needs immediate attention and supportive policies as the country could earn huge foreign exchange through value addition in the agriculture sector.

Hyder urged the PM’s advisor to have a meeting with traders and listen to their point of view on International Mobile Equipment Identity (IMEI) registration with Pakistan Telecommunication Authority (PTA).