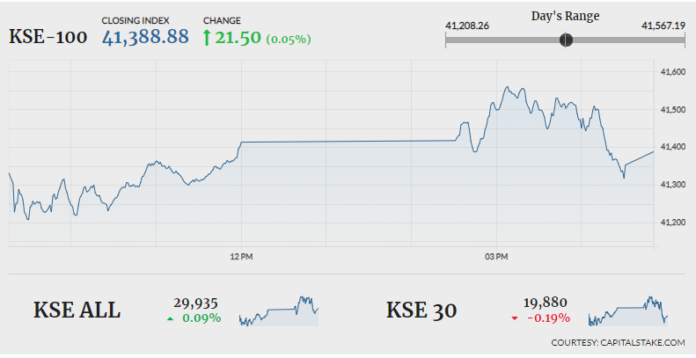 KARACHI: Volatility continued for the second consecutive session at the Pakistan Stock Exchange (PSX) where indices swung in both green and red zones in search of a clear direction.

Foreign investors, to everyone’s surprise, ended as net buyers in the last trading session (Thursday) with a minor net inflow of $0.27 million.

On the economic front, the foreign exchange reserves held by the central bank declined by 1.26 per cent for the 11th successive week, as per the latest data released by the State Bank of Pakistan. The reserves have dropped below the $8 billion mark and now stand at $7.68 billion, raising concerns about Pakistan’s ability to meet its financing requirements.

The KSE 100 benchmark index traded in the negative direction right from the start and touched an intraday low of 41,208.26 after losing 159.12 points. The index then recovered its losses right before the market was suspended for Jummah break. After gathering 199.81 points, the index touched its intraday high at 41,567.19. It finally settled at 41,388.88 after gaining 21.50 points. The KMI 30 index and KSE All Share index ended positively with a minor appreciation of 29.59 points and 26.91 points respectively.

In an announcement sent to the Pakistan Stock Exchange (PSX), the management of Amreli Steels Limited (ASTL +2.54%) has said it would commence the third phase of its expansion plan to establish an additional state-of-the-art rolling mill with an estimated cost of Rs6.5 billion. According to the company, this expansion project would help increase the existing capacity from 605,000 metric tonnes per year to 1,105,000 metric tonnes per annum and is expected to be completed in three years’ time from financial close.

It was also learnt that Interloop Limited, the manufacturer of socks for Adidas and Nike in Pakistan, is preparing for an initial public offering. The company is planning to raise over Rs6.8 billion ($51 million) for the expansion of its sock manufacturing capacity and to enter the denim business. The IPO is likely to take place in January next year.